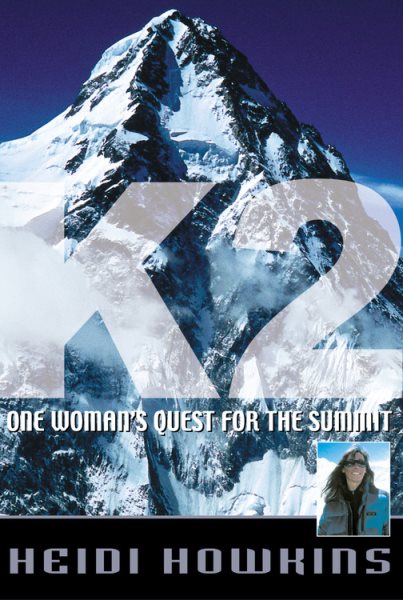 The author shares her journey to the summit of K2 as one of the few woman to attempt to scale the treacherous mountain. Read More
It stands as the ultimate challenge to human endurance, where dreams and destiny meet?and often collide. Its routes are steeper and more difficult than those of Mount Everest, and the weather is significantly colder and less predictable. Only 148 men and women have reached its summit?and 21 of them never made it back down. The mountain, of course, is K2, and Heidi Howkins didn?t want to ?just climb? it. She insisted on doing it alpine style?without established camps, porters, or supplemental oxygen. K2 is her riveting, stunningly photographed first-person account of her historic climb, as a member of the American K2000 expedition. Seeking to be the first American woman to accomplish this feat, Howkins, a mother of a seven-year-old, believes the rewards of living on the edge outweigh the risks whenever she sets foot on the world?s highest peaks. ?Mountaineering is a life-or-death situation,? she explains. ?And I have to be ready for whatever challenge I may face. I take it seriously. My daughter gives me a desperate kind of strength that helps motivate my training.? K2 is a powerful testament to this uncommon courage and determination. Read Less

The Nonexistent Knight and The Cloven Viscount