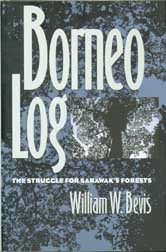 After a year as exchange professor at a Tokyo university, William Bevis spent part of the next ye... Read More
After a year as exchange professor at a Tokyo university, William Bevis spent part of the next year traveling in Sarawak, a Malaysian state located on the northern part of the island of Borneo. About the size of New York, it has a population of 1.7 million people living, outside of a few towns, in a world of jungle and brown rivers. There the rainforest is being cut rapidly, local corruption and greed siphon off most of the profit, native rights and land uses are being obliterated, and much of the fine timber is shipped to Japan to become plywood forms for concrete that are thrown away after two uses.This book is a travel narrative and also a serious environmental study of exploitation of third-world resources. During his stay in Sarawak, the author lived with both native activists and timber camp managers, seeking to understand the motives and actions of Japanese companies, Chinese entrepreneurs, and the native population most affected by the timber trade.Interspersed with chapters narrating the author’s journey are chapters dealing with the history, economy, and political life of the region. Fascinating profiles of major figures who have influenced the course of events include James Wong, Minister of Environment for Sarawak and owner of one of the largest timber concessions, and Bruno Manser, a Swiss adventurer who was adopted by the nomadic Penan tribe and hunted by the police for organizing opposition to the timber trade.Borneo Log is not simply a book about environmental politics in a far-away place. The power of the book lies in the author’s extraordinary ability to bring home the related global disasters of the destruction of the world’s rainforests and its indigenous peoples. This is a personal and passionate account of how ordinary men and women are fighting to defend a way of life that is rapidly disappearing along with their country’s resources, and how the problems of their lives echo in our own. Read Less

Goodreads reviews for Borneo Log: The Struggle for Sarawak's Forests

Earth: Inside and Out (American Museum of Natural History Bo...