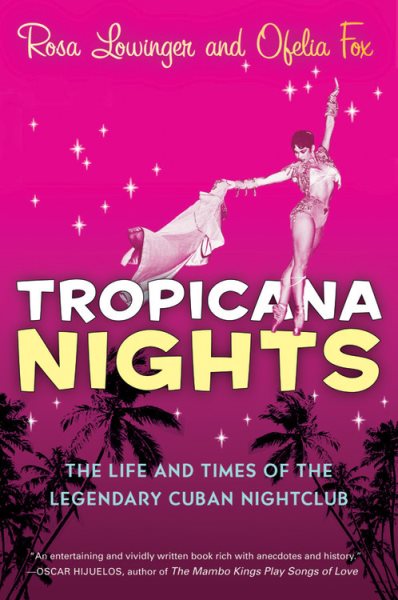 A history of the celebrated 1950s Cuban nightclub cites its unique status as an institution that operated free from the American mob's control, traces its evolution against a backdrop of pre-Revolutionary Cuba, and cites performances by such figures as Nat "King" Cole and Josephine Baker. Reprint. Read More
Of all Cuba's nightclubs and cabarets, Tropicana has always held place of honor. Part casino and part cabaret it was all Cuban: the only nightclub owned and run by Cubans rather than by the American mob. TROPICANA NIGHTS brings back the days and nights of its greatest glory, in the 1940s and 1950s, when Havana was one of the most sophisticated and vibrant tourist destinations in the world, and where the combination of music, dance, gambling, and sex made it irresistible to post-War America. Co-written by Rosa Lowinger, a Havana-born American journalist who specializes in Cuban culture, and Ofelia Fox, the octogenarian widow of the nightclub's last proprietor, the book combines cultural history with memoir to reconstruct the days when, to thousands, Tropicana seemed like the most glorious place on earth-a "paradise under the stars." Part of the story recounted in this book is the growing bond between Lowinger and Fox, and how the older woman reveals to the younger what Tropicana came to represent. "If you grow up among Cuban exiles in Miami," Lowinger writes, "you quickly become used to hyperbole, to memories clouded by grief and loss. Everything in Cuba had once been more beautiful, more elegant, more glamorous. To many, Tropicana was the ultimate symbol of those days. But it belonged to my parents' world, not mine." When Rosa met Ofelia, however, she realized that the Tropicana's story transcended generations, and that the only way to bring it to life was to combine memoir and narrative. Read Less

Goodreads reviews for Tropicana Nights: The Life and Times of the Legendary Cuban Nightclub