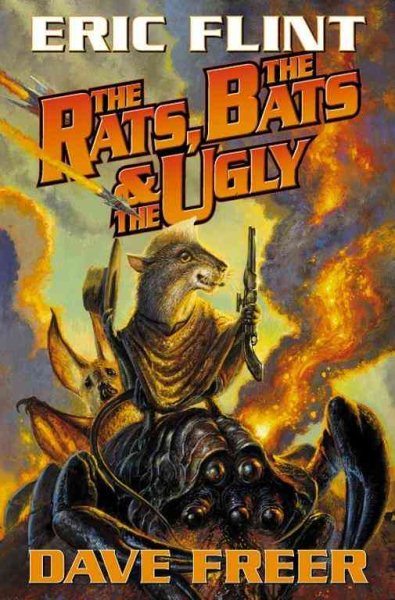 Trapped behind enemy lines with a group of cyber-enhanced rats and bats, Chip Connolly must rescue a damsel in distress, confront the unpleasant personalities of his rodent companions, and fend off an alien attack. Reprint. Read More
Chip Connolly was a conscripted grunt in trouble: stuck behind enemy lines with a bunch of cyber-uplifted rats and bats. Rats with human speech, but with rat priorities: sex, food and strong drink. And the bats were revolutionaries planning to throw off the human yoke -- with high explosive. Then there was the girl they'd rescued. Rich. Beautiful. With a passionate crush on her "heroic" rescuer. Her entourage was a screwball Alien tutor, and a cyber-uplifted lemurlike pet galago with delusions of being the world's greatest lover. Of course things only got worse. Seven rats, five bats, a galago, two humans, a sea-urchin-like alien and an elderly vineyard tractor without brakes...against several million inimical aliens. He was going to die. Mind you, not dying could be even more terrible. That girl might get him. Read Less

The Alexander Inheritance (1) (Ring of Fire)