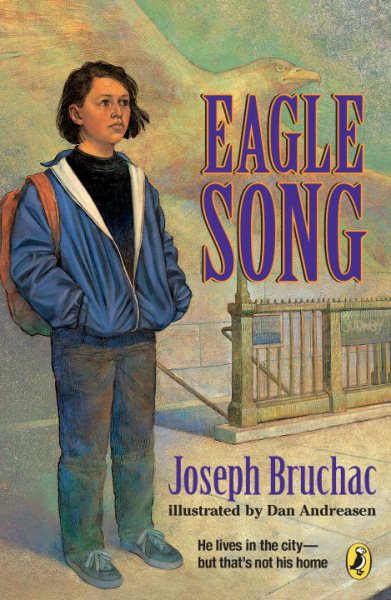 After moving from a Mohawk reservation to Brooklyn, New York, eight-year-old Danny Bigtree encounters stereotypes about his Native American heritage Read More
A contemporary middle grade story about confronting bullying and prejudice Danny Bigtree's family has moved to Brooklyn, New York, and he just can't seem to fit in at school. He's homesick for the Mohawk reservation, and the kids in his class tease him about being an Indian—the thing that makes Danny most proud. Can he find the courage to stand up for himself? “A worthy, well-written novella.” —Kirkus Reviews “This appealing portrayal of a strong family offers an unromanticized view of Native American culture, and a history lesson about the Iroquois Confederacy; it also gives a subtle lesson in the meaning of daily courage.” —Publishers Weekly "With so many Native American stories set in the misty past, it's great to read a children's book about an Iroquois boy who lives in the city now. Bruchac weaves together the traditional and the realistic as Danny's ironworker father tells stories of his people's history and heroes, stories that give Danny courage to confront his schoolyard enemies and make friends with them.” —Booklist Read Less

The Buffalo in the Syracuse Zoo and Other Poems

THE WARRIORS By Bruchac, Joseph (Author) Paperback on 01-Sep...