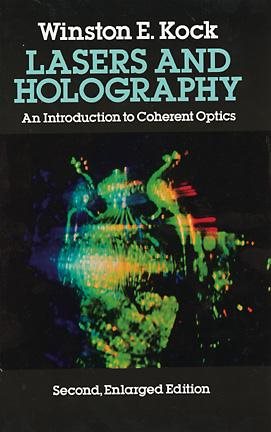 Accessible, illustrated introduction covers wave patterns and coherence, summarizes the development of lasers and the phenomenon of wave diffraction, and describes zone plates and properties of holograms. 1981 edition. Read More
As the words holo (complete) and gram (message) connote, the hologram captures the entire message of a scene in all its visual properties, including the realism of three dimensions. It involves the simple process of photographically recording the pattern formed by two interfering sets of light waves, one of these sets being a reference wave. With the introduction of lasers to holography in 1963, real advances in the development of holography began to take place.Dr. Kock's lucid introduction to lasers and holography has now been revised and updated for a second edition. It begins with a clear discussion of wave patterns and coherence. Then the development of lasers is summarized, along with the phenomenon of wave diffraction. Finally, the important subjects of zone plates and the properties of holograms are skillfully described. A new, concluding chapter brings the story up to the present, with a survey of recent advances in such areas as viewing holograms, hologram computer memories, liquid surface holography, synthetic-aperture radar and sonar, large new lasers, fiber optics, etc. Using language that can be readily understood by high school and junior high school students, Dr. Kock has written a brief, yet authoritative volume that should satisfy anyone's curiosity about this burgeoning field. The remarkable discoveries that have already occurred are only a prelude to an even more remarkable future. 84 illustrations, including 8 new to this edition. New preface. Suggested (1981) additional reading. Index. Read Less

Waiter Rant: Thanks for the Tip--Confessions of a Cynical Wa...

All the Queen's Men