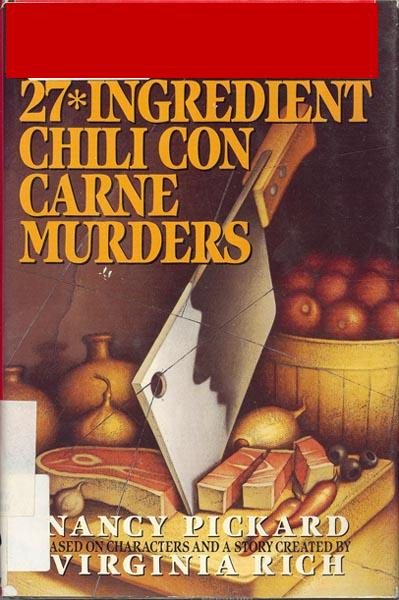 When one of her guests dies after eating her twenty-seven ingredient chili con carne, Eugenia Potter makes it her quest to find the person or persons who added a twenty-eighth--and fatal--ingredient to the recipe Read More
The "culinary queen of crime" returns in a delectable novel of food and foul play. Much-loved chef and amateur sleuth Eugenia Potter finds herself mixed up in murder in The 27-Ingredient Chili con Carne Murders, a book that marks the exciting collaboration of two mistresses of mystery, Nancy Pickard and Virginia Rich.When Eugenia Potter receives an urgent phone call from the manager of her ranch, Las Palomas, in Tucson, she's only too happy to drop everything and fly home. After all, something inside her is telling her to get back to the desert ranch - why else would she be cooking spicy Mexican meatball soup at her cottage in Maine, when clam chowder should be on the menu?But along with the excitement she feels at going home is an inexplicable sense of foreboding, which is tragically realized once she arrives in Tucson. The ranch manager and his granddaughter are missing from Las Palomas and feared dead. A cryptic note written by one of them containing initials and a meeting time is the only clue that leads Mrs. Potter to suspect foul play. But why would anyone want to harm her old friends? And where could they have disappeared to?When a guest at a dinner gathering thrown by Mrs. Potter winds up dead - apparently from eating her own famous 27-ingredient chili - Mrs. Potter knows she must get involved in solving the crimes before the murderer strikes again.In the midst of these disturbing goings-on, an old love from Eugenia's past arrives on the scene to spice up the danger with a bit of romance. The mysteries of her own heart prove every bit as perplexing as the crimes, but offer a chance at happiness Mrs. Potter had never expected. Read Less

No Body (Jenny Cain Mysteries, No. 3)

The Scent of Rain and Lightning: A Novel