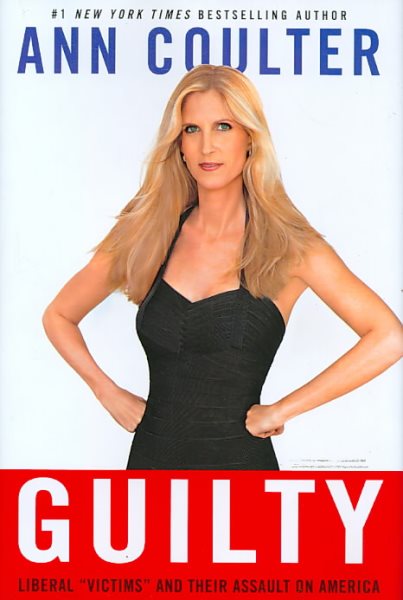 The controversial political pundit shares her thoughts about the state of modern American politics, culture, and society. Read More
“Liberals seem to have hit upon a reverse Christ story as their belief system. He suffered and died for our sins; liberals make the rest of us suffer for sins we didn’t commit.”Who are the victims here? To hear liberals tell it, you’d think they do nothing but suffer at the hands of ruthless entities like the “Republican Attack Machine” and Fox News.Really?It’s just another instance of the Big Lie, of course, told so often that some people have actually started to believe it. In Guilty, Ann Coulter explodes this myth to reveal that when it comes to bullying, no one outdoes the Left. Citing case after case, ranging from the hilariously absurd to the shockingly vicious, Coulter dissects these so-called victims who are invariably the oppressors. For instance:•Single mothers: Getting pregnant isn’t like catching the flu. There are volitional acts involved–someone else explain it to Dennis Kucinich. By this purposeful act, single mothers cause irreparable harm to other human beings–their own children–as countless studies on the subject make clear.•The myth of the Republican Attack Machine: The most amazing thing liberals have done is create the myth of a compliant right-wing media with Republicans badgering baffled reporters into attacking Democrats. It’s so mad, it’s brilliant. It’s one kind of lie to say the Holocaust occurred when the Swedes killed the Jews. But it’s another kind of lie entirely to say the Holocaust occurred when the Jews killed the Nazis.•“Brave” liberals: In addition to being beautiful, compassionate tribunes of the downtrodden, liberals are brave. I know that because they’re always telling me how brave they are. Why, five nights a week, MSNBC’s Keith Olbermann courageously books guests who completely agree with him. It doesn’t get much braver than that.•Obambi’s luck: While B. Hussein Obama piously condemned attacks on candidates’ ­families, his media and campaign surrogates ripped open the court-sealed divorce records of his two principal opponents in his Senate race in Illinois.•The offenders are offended!: Republican senator George Allen’s career was destroyed when he made a joking remark to a privileged Indian American harassing him at campaign stops. When did rich kids become a new protected category that must be shielded from words that are insulting in other languages? How did Sidarth become a specially anointed victim? What did we ever do to India? And why didn’t we ever hear about the far more offensive anti-Semitic flyers of Allen’s opponent Jim Webb?One essential and recurring truth about self-righteous liberals, says Coulter, is that “they viciously attack all while wailing that they are the true victims.” With Guilty–a mordantly witty and shockingly specific catalog of offenses that liberals would rather we ignore and forget–Ann Coulter presents exhibits A through Z. Read Less

Goodreads reviews for Guilty: Liberal "Victims" and Their Assault on America

Treason: Liberal Treachery from the Cold War to the War on T...