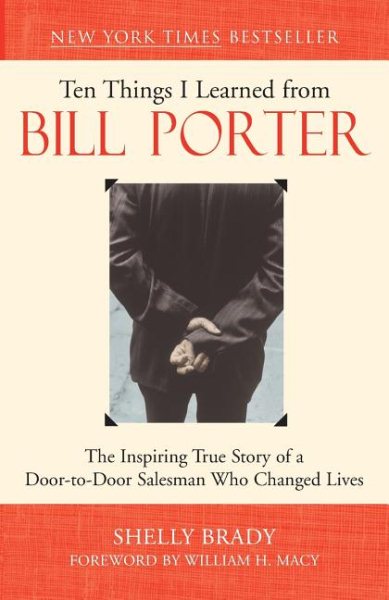 The motivational speaker shares his extraordinarily inspiring story, recalling his efforts to become a door-to-door salesman despite suffering from cerebral palsy, a difficult journey that would eventually produce results as he eventually earns the rank of top salesman in his region. Reprint. 30,000 first printing. $25,000 ad/promo. Read More
Despite being born with cerebral palsy, Bill Porter grew up to take the physically demanding job of a door-to-door salesman in the worst neighborhood in Portland, Oregon (without pay, only commissions). Eventually he became the company's top salesman in the city, the region, and finally the country. Along the way he learned powerful life lessons that he imparted to those around him. One of those people was Shelly Brady, first hired by Porter as a typist and driver, later a great friend. In this inspiring book, she brings together those lessons. These seemingly simple ideas ? "Mothers Know Best," "Persistence Pays Off," "Know Your Limits but Reach Beyond Them" ? resonate powerfully when seen through the lens of a life lived to the fullest against what would be impossible odds for many. Whether finding cooperative bellmen to button his cuffs or beaming a video to his speaking engagements because of ill health, Porter, whose life story became a cause célèbre in the 1990s, gets the job done with a smile ? and shows readers how to do the same. Read Less

Goodreads reviews for Ten Things I Learned from Bill Porter: The Inspiring True Story of the Door-to-Door Salesman Who Changed Lives