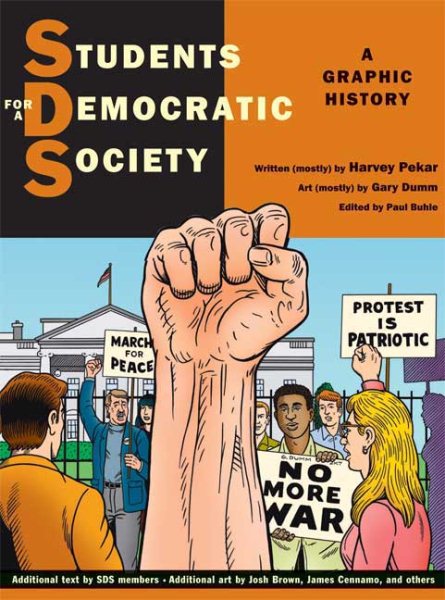 Created in the form of a graphic novel, an illustrated history of the Students for a Democratic Society organization details the 1962 convention during which the group prepared the Port Huron Statement and its role during the tumultuous era of the 1960s. Read More
The History of SDS as You’ve Never Seen It Before In 1962 at a United Auto Workers’ camp in Michigan, Students for a Democratic Society held its historic convention and prepared the famous Port Huron Statement, drafted by Tom Hayden. This statement, criticizing the U.S. government’s failure to pursue international peace or address domestic inequality, became the organization’s manifesto. Its last convention was held in 1969 in Chicago, where, collapsing under the weight of its notoriety and popularity, it shattered into myriad factions. Through brilliant art and they were-there dialogue, famed graphic novelist Harvey Pekar, gifted artist Gary Dumm, and renowned historian Paul Buhle illustrate the tumultuous decade that first defined and then was defined by the men and women who gathered under the SDS banner. Students for a Democratic Society: A Graphic History captures the idealism and activism that drove a generation of young Americans to believe that even one person’s actions can help transform the world. Read Less

Goodreads reviews for Students for a Democratic Society: A Graphic History