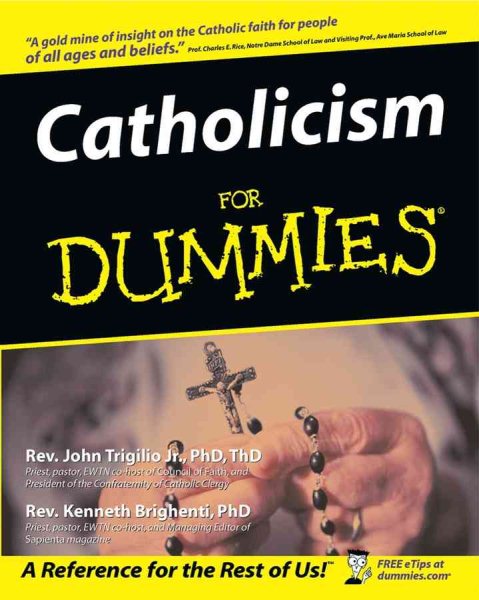 A guide to the world's largest Christian denomination summarizes the basic beliefs, practices, rituals, teachings, and traditions of Catholicism. Read More
There are more than one billion Catholics in the world, and each one has a similar set of basic beliefs and practices that he or she follows. Some of the teachings of Catholicism are thousands of years old, while others are more recent. So what is the Catholic culture like and what do they believe? Catholicism For Dummies answers these and many other questions.Whether you’re a Catholic or not, you may be totally clueless or just unaware of some aspects of Catholic traditions, history, doctrine, worship, devotion, or culture. No sweat. Regardless of whether you’re engaged, married, related to a Catholic, or just curious about what Catholics really do believe, this book is for you.Catholicism For Dummies is not a catechism or religious textbook, but a casual, down-to-earth introduction for non-Catholics and reintroduction for Catholics. It gives commonsense explanations so that the next time you’re invited to a Catholic wedding, Baptism, funeral, Confirmation, or First Communion, you won’t be totally confused. You’ll also discover other important topics that can help you better understand the Catholic culture—from morality and devotions to worship and liturgy. This book will familiarize you with Catholicism by showing you:What it means to be a Catholic: traditions, prayers, beliefs, and holidaysWho is who in the Catholic hierarchyHow Catholics worshipWhat the Seven Sacraments and Ten Commandments areThe book regarded as the holiest to Catholics: The BibleThe Church’s stand on some sticky issuesCatholicism For Dummies presents a rich tapestry and history of the Catholic faith—from devotions to doctrines. This intelligent and faithful look at Catholicism will open your eyes to this religion and answer many of the questions you may have about it. Read Less

Goodreads reviews for Catholicism For Dummies

The Catholicism Answer Book: The 300 Most Frequently Asked Q...

The Everything Bible Book: From Genesis to Revelation, All Y...

Eat, Pray, Love: One Woman's Search for Everything Across It...