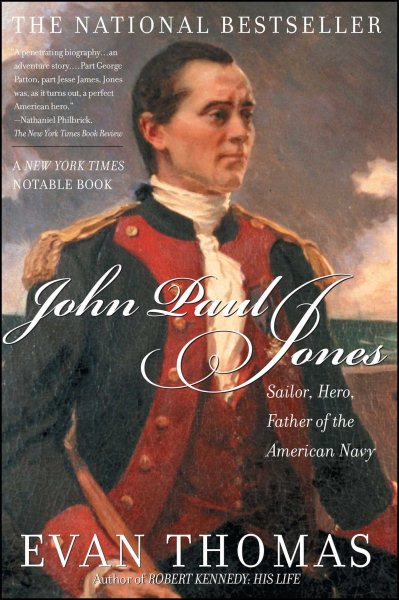 Traces the naval hero's modest Scottish origins, the circumstances that brought him to America under a charge of murder and a false name, his sea battle achievements, and his acclaim by such figures as Washington, Jefferson, Adams, and Franklin. Reprint. 60,000 first printing. Read More
The New York Times bestseller from master biographer Evan Thomas brings to life the tumultuous story of the father of the American Navy.John Paul Jones, at sea and in the heat of the battle, was the great American hero of the Age of Sail. He was to history what Patrick O’Brian’s Jack Aubrey and C.S. Forester’s Horatio Hornblower are to fiction. Ruthless, indomitable, clever; he vowed to sail, as he put it, “in harm’s way.” Evan Thomas’s minute-by-minute re-creation of the bloodbath between Jones’s Bonhomme Richard and the British man-of-war Serapis off the coast of England on an autumn night in 1779 is as gripping a sea battle as can be found in any novel. Drawing on Jones’s correspondence with some of the most significant figures of the American Revolution—John Adams, Benjamin Franklin, Thomas Jefferson—Thomas’s biography teaches us that it took fighters as well as thinkers, men driven by dreams of personal glory as well as high-minded principle, to break free of the past and start a new world. Jones’s spirit was classically American. Read Less

The Battle for Leyte Gulf: The Incredible Story of World War...