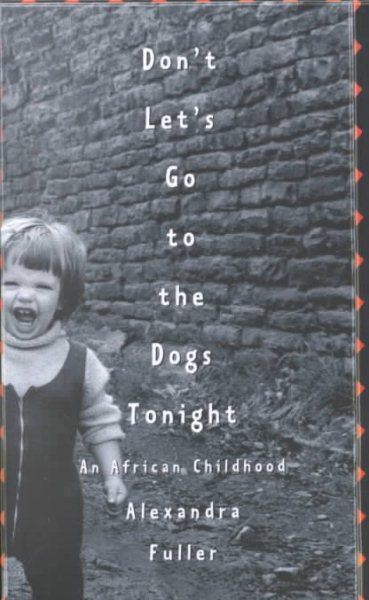 The author describes her childhood in Africa during the Rhodesian civil war of 1971 to 1979, relating her life on farms in southern Rhodesia, Milawi, and Zambia with an alcoholic mother and frequently absent father. Read More
1. Fuller compares the smell of Africa to 'black tea, cut tobacco, fresh fire, old sweat, young grass.' She describes 'an explosion of day birds . . . a crashing of wings' and 'the sound of heat. The grasshoppers and crickets sing and whine. Drying grass crackles. Dogs pant.' How effective is the author in drawing the reader into her world with the senses of sound, and smell, and taste? Can you find other examples of her ability to evoke a physical and emotional landscape that pulses with life? What else makes her writing style unique? 2. Given their dangerous surroundings in Zimbabwe, Malawi, and Zambia and a long streak of what young Bobo describes as 'bad, bad luck,' why does the Fuller family remain in Africa? 3. Drawing on specific examples, such as Nicola Fuller's desire to 'live in a country where white men still ruled' and the Fuller family's dramatic interactions with African squatters, soldiers, classmates, neighbors, and servants, how would you describe the racial tensions and cultural differences portrayed in Don't Let's Go to the Dogs Tonight , particularly between black Africans and white Africans? 4. Don't Let's Go to the Dogs Tonight is rich with humorous scenes and dialogue, such as the visit by two missionaries who are chased away by the family's overfriendly dogs, a bevy of ferocious fleas, and the worst tea they have ever tasted. What other examples of comedy can you recall, and what purpose do you think they serve in this serious memoir? 5. Fuller describes the family's move to Burma Valley as landing them 'right [in] the middle, the very birthplace and epicenter, of the civil war in Rhodesia.' Do her youthful impressions give a realistic portrait of the violent conflict? 6. The New York Times Book Review described Nicola as 'one of the most memorable characters of African memoir.' What makes the author's portrait of her mother so vivid? How would you describe Bobo's father? 7. Define the complex relationship between Bobo and Vanessa. How do the two sisters differ in the ways that they relate to their parents? 8. Animals are ever present in the book. How do the Fullers view their domesticated animals, as compared to the wild creatures that populate their world? 9. Of five children born to Nicola Fuller, only two survive. 'All people know that in one way or the other the dead must be laid to rest properly,' Alexandra Fuller writes. Discuss how her family deals with the devastating loss of Adrian, Olivia, and Richard. Are they successful in laying their ghosts to rest? 10. According to Bobo, 'Some Africans believe that if your baby dies, you must bury it far away from your house, with proper magic and incantations and gifts for the gods, so that the baby does not come back.' Later, at Devuli Ranch, soon after the narrator and her sister have horrified Thompson, the cook, by disturbing an old gravesite, Bobo's father announces that he is going fishing: 'If the fishing is good, we'll stay here and make a go of it. If the fishing is bad, we'll leave.' What role does superstition play in this book? Look for examples in the behavior and beliefs of both black and white Africans. 11. Consider Fuller's interactions with black Africans, including her nanny in Rhodesia and the children she plays 'boss and boys' with, as well as with Cephas the tracker and, later, the first black African to invite her into his home. Over the course of Don't Let's Go to the Dogs Tonight , how does the narrator change and grow? 12. By the end of the narrative, how do you think the author feels about Africa? Has the book changed your own perceptions about this part of the world? Read Less

Goodreads reviews for Don't Let's Go to the Dogs Tonight: An African Childhood

Leaving Before the Rains Come

Don't Let's Go to the Dogs Tonight: An African Childhood