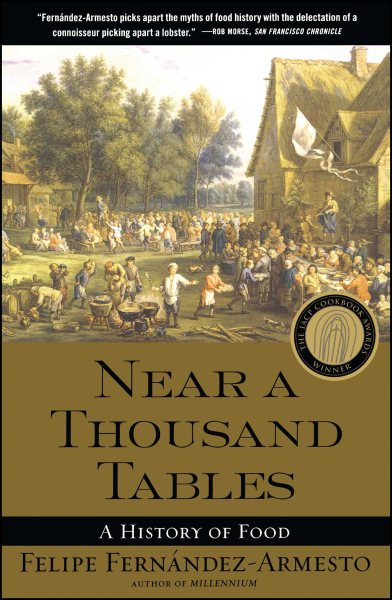 Charts the course of humanity's relationship with food, discussing such topics as the origins of cooking, the ritualization of eating, the inceptions of herding and agriculture, the rendering of food as a status symbol, and the globalization of it comes from. Reprint. 20,000 first printing. Read More
In <i>Near a Thousand Tables,</i> acclaimed food historian Felipe Fernández-Armesto tells the fascinating story of food as cultural as well as culinary history -- a window on the history of mankind. <br> In this "appetizingly provocative" <i>(Los Angeles Times)</i> book, he guides readers through the eight great revolutions in the world history of food: the origins of cooking, which set humankind on a course apart from other species; the ritualization of eating, which brought magic and meaning into people&#39;s relationship with what they ate; the inception of herding and the invention of agriculture, perhaps the two greatest revolutions of all; the rise of inequality, which led to the development of haute cuisine; the long-range trade in food which, practically alone, broke down cultural barriers; the ecological exchanges, which revolutionized the global distribution of plants and livestock; and, finally, the industrialization and globalization of mass-produced food. <br> From prehistoric snail "herding" to Roman banquets to Big Macs to genetically modified tomatoes, <i>Near a Thousand Tables</i> is a full-course meal of extraordinary narrative, brilliant insight, and fascinating explorations that will satisfy the hungriest of readers. Read Less

Goodreads reviews for Near a Thousand Tables: A History of Food

Civilizations: Culture, Ambition, and the Transformation of...

Near a Thousand Tables: A History of Food

Millennium: A History of the Last Thousand Years