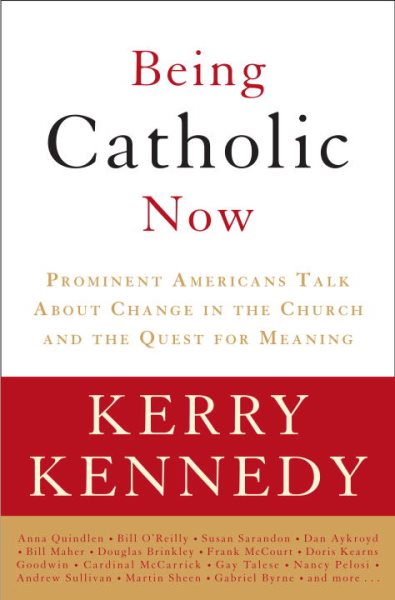 Features over thirty interviews with celebrities, journalists, writers, politicians, and religious leaders who candidly discuss their Catholic faith. Read More
For Kerry Kennedy, who grew up in a devoutly Catholic household coping with great loss, her family’s faith was a constant source of strength and solace. As an adult, she came to question some of the attitudes and teachings of the Catholic Church while remaining an impassioned believer in its role as a defender of the poor and oppressed.“Generations ago,” says Kennedy, “the search for spirituality came predefined and prepackaged. [The Church] not only gave us all the answers, it even gave us the questions to ask.” Now many of the old certainties are being reexamined. In an attempt to convey this sea change, Kennedy asked thirty-seven American Catholics to speak candidly about their own faith—whether lost, recovered, or deepened—and about their feelings regarding the way the Church hierarchy is moving forward.The voices included here range from respectful to reproachful and from appreciative to angry. Speaking their minds are businesspeople, actors and entertainers, educators, journalists, politicians, union leaders, nuns, priests—even a cardinal. Some love the Church; some feel intensely that the Church wronged them. All have an illuminating insight or perspective.Kerry Kennedy herself speaks of the joy of growing up as one of Robert and Ethel Kennedy’s eleven children, of the tragedies that eventually befell her family, and of how religion was deeply woven through good times and bad. Journalist Andrew Sullivan talks about reconciling his devout Catholicism with the Church’s condemnation of his identity as a gay man. TV newswoman Cokie Roberts recalls the nuns who taught her and “took girls seriously when nobody else did.” Comedian Bill Maher declares, “I hate religion. It’s the worst thing in the world”—and goes on to defend his bold assertion. Writer Anna Quindlen depicts a common parental challenge: passing along traditions and values to a younger generation sometimes deaf to spiritual messages.Through these and many other voices that speak not only to Catholics but to all of us, Being Catholic Now redefines an ancient institution in the most contemporary of terms.From Being Catholic Now“When my mom asked if I wanted to be a nun, I said I’d rather be a priest. . . . The nuns were always wonderful, but the power was with the priest.” —Nancy Pelosi“There are aspects of studying the saints, with the candles, incense, and Latin Masses and some of the pageantry of the Church that, as an American historian, make me feel part of a larger wave of history. That it’s not a newfangled religion, which some people get great solace from. I feel that I’m connected to places.” —Douglas Brinkley“Faith isn’t like picking courses off a menu. It’s a journey, and it’s a path. If your path and journey have been within one structure your entire life, then simply leaving isn’t an option.” —Andrew Sullivan“Why stay Catholic? Because the hierarchy is not the Church. . . .We [the people of God] are the Church. They can’t take that away from us.” —Cokie Roberts“I was told very early on by the nuns that I had an ‘overabundance of original sin.’ I was a quiet kid, but I was curious. I asked the wrong questions.” —Susan Sarandon“I don’t believe you can be authentically Catholic without being committed to the social doctrine of the Church. When I was in grammar school, we had these little boxes to help the poor. That was good, but that is half of it. The other half is to find out why there are so many poor people and how we can do something to help them.” —Cardinal Theodore Edgar McCarrick “I am reconciled to the oblivion that is coming. I see no proof of anything else, if it is a matter of faith. I admire people who have faith in God. It must be a great comfort to them, but I had to get out from under the fear and the guilt.” —Frank McCourt“I went to church and the door was locked. I was knocking and ringing the bell. I waited and waited and nobody came. [The priest thought] there was an emergency, because of all the banging and ringing. He looked down at me and said, ‘What is it?’ I said, ‘I’m sorry to bother you, Father, but I’ve been away from the Church many, many years and I’d like to come back. I’d like to go to confession.’ He looked at me and something behind his eyes said, ‘You came to the right place.’ He knew that it was an important moment for me; he got it instantly.” —Martin Sheen Read Less

Goodreads reviews for Being Catholic Now: Prominent Americans Talk About Change in the Church and the Quest for Meaning

Being Catholic Now: Prominent Americans Talk About Change in...