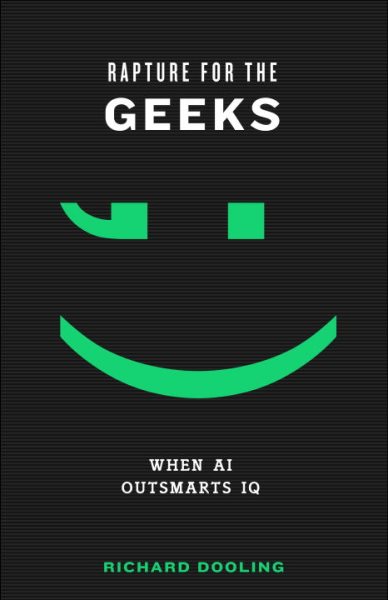 Looks at the rapid pace with which technology is changing, as well as the impact on human life in a high-tech world in which computers surpass humans in intelligence. Read More
Will the Geeks inherit the earth?If computers become twice as fast and twice as capable every two years, how long is it before they’re as intelligent as humans? More intelligent? And then in two more years, twice as intelligent? How long before you won’t be able to tell if you are texting a person or an especially ingenious chatterbot program designed to simulate intelligent human conversation? According to Richard Dooling in Rapture for the Geeks—maybe not that long. It took humans millions of years to develop opposable thumbs (which we now use to build computers), but computers go from megabytes to gigabytes in five years; from the invention of the PC to the Internet in less than fifteen. At the accelerating rate of technological development, AI should surpass IQ in the next seven to thirty-seven years (depending on who you ask). We are sluggish biological sorcerers, but we’ve managed to create whiz-bang machines that are evolving much faster than we are. In this fascinating, entertaining, and illuminating book, Dooling looks at what some of the greatest minds have to say about our role in a future in which technology rapidly leaves us in the dust. As Dooling writes, comparing human evolution to technological evolution is “worse than apples and oranges: It’s appliances versus orangutans.” Is the era of Singularity, when machines outthink humans, almost upon us? Will we be enslaved by our supercomputer overlords, as many a sci-fi writer has wondered? Or will humans live lives of leisure with computers doing all the heavy lifting? With antic wit, fearless prescience, and common sense, Dooling provocatively examines nothing less than what it means to be human in what he playfully calls the age of b.s. (before Singularity)—and what life will be like when we are no longer alone with Mother Nature at Darwin’s card table. Are computers thinking and feeling if they can mimic human speech and emotions? Does processing capability equal consciousness? What happens to our quaint beliefs about God when we’re all worshipping technology? What if the human compulsion to create ever more capable machines ultimately leads to our own extinction? Will human ingenuity and faith ultimately prevail over our technological obsessions? Dooling hopes so, and his cautionary glimpses into the future are the best medicine to restore our humanity. Read Less

Goodreads reviews for Rapture for the Geeks: When AI Outsmarts IQ