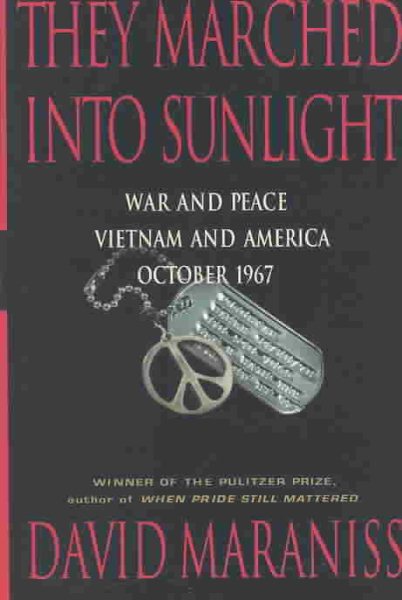 Focuses on a crucial two-day battle in Vietnam that was also marked by an ill-fated protest by University of Wisconsin students at the Dow Chemical Company, in an hour-by-hour narrative. Read More
Here is the epic story of Vietnam and thesixties told through the events of a few tumultuous days in October 1967. David Maraniss takes the reader on an unforgettable journey to the battlefields of war and peace. With meticulous and captivating detail, They Marched Into Sunlight brings that catastrophic time back to life while examining questions about the meaning of dissent and the official manipulation of truth, issues that are as relevant today as they were decades ago. In a seamless narrative, Maraniss weaves together three very different worlds of that time: the death and heroism of soldiers in Vietnam, the anger and anxiety of antiwar students back home, and the confusion and obfuscating behavior of officials in Washington. In the literature of the Vietnam era, there are powerful books about soldiering, excellent analyses of American foreign policy in Southeast Asia, and many dealing with the sixties' culture of protest, but this is the first book to connect the three worlds and present them in a dramatic unity. To understand what happens to the people of this story is to understand America's anguish. In the Long Nguyen Secret Zone of Vietnam, a renowned battalion of the First Infantry Division is marching into a devastating ambush that will leave sixty-one soldiers dead and an equal number wounded. On the University of Wisconsin campus in Madison, students are staging an obstructive protest at the Commerce Building against recruiters for Dow Chemical Company, makers of napalm and Agent Orange, that ends in a bloody confrontation with club-wielding Madison police. And in Washington, President Lyndon Johnson is dealing with pressures closing in on him from all sides and lamenting to his war council, "How are we ever going to win?" Based on thousands of primary documents and 180 on-the-record interviews, the story unfolds day by day, hour by hour, and at times minute by minute, with a rich cast of characters -- military officers, American and Viet Cong soldiers, chancellors, professors, students, police officers, businessmen, mime troupers, a president and his men, a future mayor and future vice president -- moving toward battles that forever shaped their lives and evoked cultural and political conflicts that Read Less

Goodreads reviews for They Marched Into Sunlight: War and Peace Vietnam and America October 1967

Clemente: The Passion and Grace of Baseball's Last Hero

When Pride Still Mattered : A Life Of Vince Lombardi

They Marched Into Sunlight: War and Peace Vietnam and Americ...