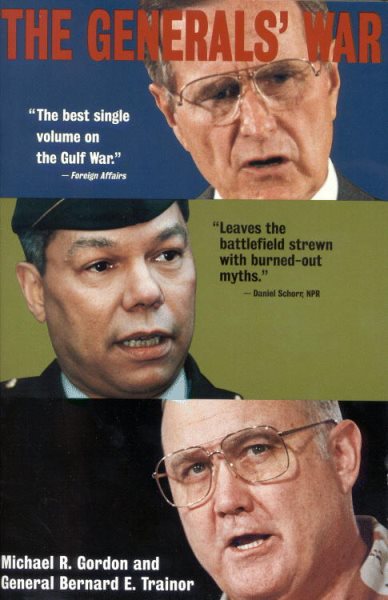 An account of the war in the Persian Gulf takes readers behind the scenes at the Pentagon and the White House to provide portraits of the top military commanders and to discuss what worked and what did not Read More
In a unique combination of journalism and military expertise, Michael R. Gordon, chief defense correspondent for The New York Times, and retired three-star Marine Corps General Bernard E. Trainor provide a definitive, behind-the-scenes account and analysis of the planning and execution of the Persian Gulf War. The inside story of the war is a tale of politics and clashing military cultures: while one war was being waged against Iraq, another was being fought among the generals themselves. Drawing on interviews with senior allied officials in the Persian Gulf, Western Europe, and the United States, The Generals' War offers unvarnished portraits of top military commanders, as well as new disclosures about the conflicts and power struggles within the anti-Iraq coalition and the American high command.The Air Force believed that wars could be decided through strategic bombing. The Army saw the war as an opportunity to apply its doctrine of maneuver warfare. The Marine Corps approached the Gulf with a history of expeditionary warfare and amphibious assault. The Navy remained aloof from Central Command, preferring to act on its own. Although General Colin Powell and General H. Norman Schwarzkopf were tasked with developing a unified plan from these separate, sometimes conflicting agendas, they never fully harmonized the war plans. As a result, half of Iraq's Republican Guard forces got away. Three and a half years after what was considered a decisive victory, some of the same Iraqi Republican Guard forces that the allies had failed to destroy again menaced Kuwait, forcing President Clinton to order American troops back to the Persian Gulf to prevent a second Iraqi invasion. Saddam Hussein was entrenched and unbowed. The Persian Gulf War was an incomplete success. Read Less

Goodreads reviews for The Generals' War : The Inside Story of the Conflict in the Gulf

Cobra II: The Inside Story of the Invasion and Occupation of...

The Generals' War: The Inside Story of the Conflict in the G...

The Endgame: The Inside Story of the Struggle for Iraq, from...