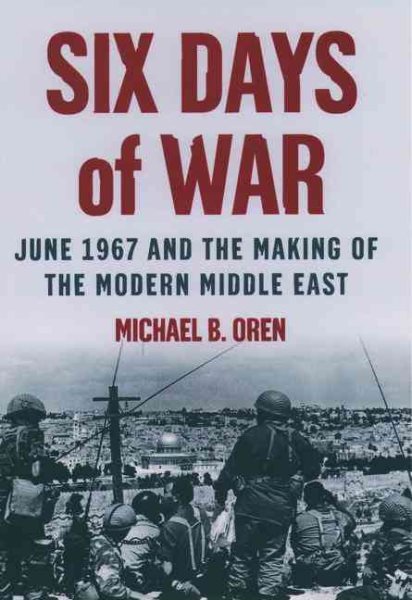 Relates the events of the six-day Arab-Israeli war of June, 1967, discussing it in the context of regional and international politics and examining its consequences for the Middle East. Read More
In Israel and the West it is called the Six Day War. In the Arab world, it is known as the June War, or simply as "the Setback." Never has a conflict so short, unforeseen and largely unwanted by both sides so transformed the world. The Yom Kippur War, the war in Lebanon, the Camp David accords, the controversy over Jerusalem and Jewish settlements in West Bank, the intifada and the rise of Palestinian terror: all are part of the outcome of those six days of intense Arab-Israeli fighting in the summer of 1967. Michael B. Oren's Six Days of War is the most comprehensive history ever published of this dramatic and pivotal event, the first to explore it both as a military struggle and as a critical episode in the global Cold War. Oren spotlights all the participants--Arab, Israeli, Soviet, and American--telling the story of how the war broke out and of the shocking ways it unfolded. Drawing on thousands of top-secret documents, on rare papers in Russian and Arabic, and on exclusive personal interviews, Six Days of War recreates the regional and international context which, by the late 1960s, virtually assured an Arab-Israeli conflagration. Also examined are the domestic crises in each of the battling states, and the extraordinary personalities--Moshe Dayan and Gamal Abdul Nasser, Hafez al-Assad and Yitzhak Rabin, Lyndon Johnson and Alexei Kosygin--that precipitated this earthshaking clash. Read Less

Goodreads reviews for Six Days of War: June 1967 and the Making of the Modern Middle East