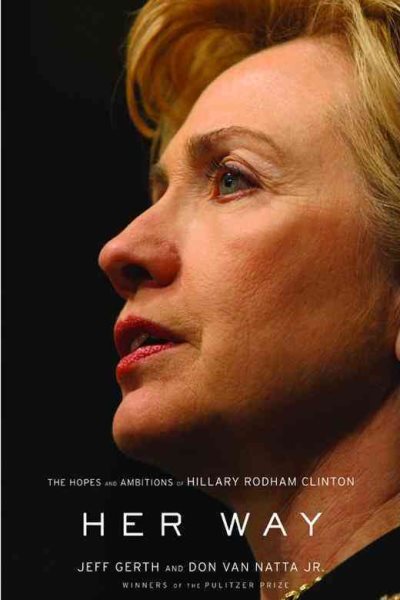 A biography of the controversial former first lady, senator, and presidential candidate examines her early years, her marriage, her role in her husband's career, possible ethical lapses, and related topics. Read More
The truth about the most important woman in AmericaIn Her Way, two Pulitzer Prize-winning New York Times investigative journalists deliver: Previously undisclosed details about the Clinton's multi-decade plan for powerincluding 8 years in the White House for Bill and 8 years for Hillary Never-before-revealed information about Hillary's involvement in her husband's campaigns - including cover-ups and the truth about Bill's draft record New details regarding Hillary's rivalry with Al Gore - and why it is likely to heat up. Provocative new information about Hillary's vote to authorize the Iraq War, and the steps she has taken to distance herself from that vote Revelations about Bill Clinton's role in Hillary's campaign and his surprising opinion of Barack Obama New details of Hillary's failure to adhere to Senate ethics rules, and what this says about her political empireShe is one of the most influential and recognizable figures in our country, and perhaps the single most divisive individual in our political landscape. She has been the subject of both hagiography and vitriolic smear jobs. But although dozens of books have been written about her, none of them have come close to uncovering the real Hillary--personal, political, in all her complications. Now, as she make her historic run for the presidency, Pulitzer Prize-winning New York Times reporters Jeff Gerth and Don Van Natta Jr. bring us the firstcomprehensive and balanced portrait of the most important woman in American politics. Drawing upon myriad new sources and previously undisclosed documents, Her Way shows us how, like many women of her generation, Hillary Rodham Clinton tempered a youthful idealism with the realities of corporate America and big-league politics. It takes readers from the dorm rooms at Wellesley to the courthouses of Arkansas and Washington; to the White House and role as First Lady like none other; inside the back rooms of the Senate, where she expertly navigates the political and legislative shoals; to her $4 million mansion in Washington, where she presides over an unparalleled fundraising machine; and to her war room, from which she orchestrates ferocious attacks against her critics. Throughout her career, she has been alternately helped and hindered by her marriage to Bill Clinton. Her Way unravels the mysteries of their political partnership--one of the most powerful and enigmatic in American history. It also explains why Hillary is such a polarizing figure. And more than any other book, it reveals what her ultimate hopes and ambitions are--for herself and for America. Read Less

Goodreads reviews for Her Way: The Hopes and Ambitions of Hillary Rodham Clinton

Her Way: The Hopes and Ambitions of Hillary Rodham Clinton

Up against the corporate wall: Modern corporations and socia...