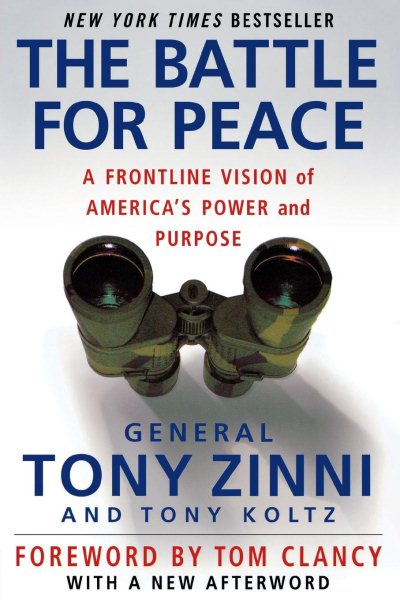 A former CENTCOM commander who served in Vietnam and in the Middle East argues that America is threatened more by the global conditions that lead to terrorism than by terrorism itself, in an account that makes recommendations on how the United States can promote a more stable and peaceful world. Reprint. 75,000 first printing. Read More
Tony Zinni commands attention on the battlefield, at peace talks, in politics, and across the media spectrum. When he stood up and called for Donald Rumsfeld's resignation in 2006, the media paid attention, and when The Battle for Peace was published, the media--and the American public--applauded its bold new vision of America's role in the world. Widely acclaimed for its clear and practical approach to promoting a more stable and peaceful world through realism and pragmatic cooperation, this book has become even more relevant as we veer dangerously close towards confrontation with Iran. In a new afterword, General Zinni provides additional insight into the war in Iraq, how to deal with Iran, and more. Read Less

Goodreads reviews for The Battle for Peace: A Frontline Vision of America's Power and Purpose

Before the First Shots Are Fired: How America Can Win Or Los...