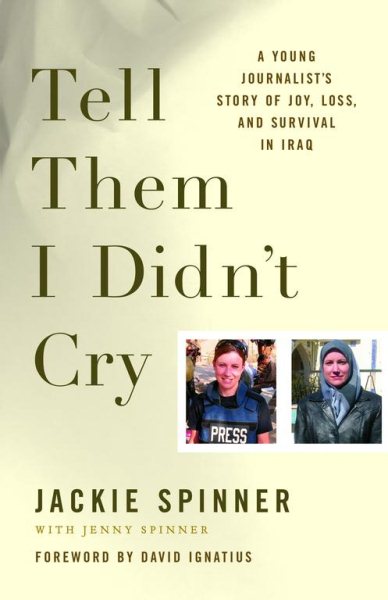 A young journalist from the Midwest describes her sojourn in Iraq as the Baghdad Bureau Chief for the "Washington Post," detailing what it is like to cover a war under the constant threat of kidnapping, injury, and death. Read More
When she arrived in Iraq in May 2004 as the most junior member of the Washington Post bureau staff, Jackie Spinner entered a war zone where traditional reporting had become impossible. Bombs were a daily occurrence and kidnapping an ever-present threat for American journalists. Yet "the longer I stayed, the more Iraq felt like my home," she writes.Tell Them I Didn't Cry is Jackie's vivid and intensely personal story of being a journalist in Iraq -- where for nine months she covered the war from its center in Baghdad, Fallujah, Kurdistan, and Abu Ghraib -- and of being transformed, eventually, from a rookie correspondent into a seasoned foreign reporter.As she grew accustomed to the realities of living and reporting in Iraq, Jackie found that there was as much to love as there was to fear. The frenetic and grueling pace was an exhilarating challenge, and she discovered a powerful sense of purpose in delivering the story of Iraq. Soon, the Iraqi translators, drivers, and bodyguards that the Post staff relied on to be their eyes and ears, and, more important, to keep them safe, became not only her colleagues, but also her close friends and tightly knit family. Still, security rapidly deteriorated and Jackie describes with chilling simplicity narrowly surviving a kidnapping attempt and writing her name and blood type on her flak jacket before covering the battle in Fallujah.By turns lighthearted, grave, vulnerable, and fiery, Jackie recounts the difficulties of being a woman in a country where women are marginalized and a journalist where the press are no longer safe. She eloquently chronicles what occurred behind her headlines as she struggled to preserve her sanity, and sometimes her life, while also doing the one job in which she had found true meaning.Jackie's account is punctuated by brief vignettes written by her identical twin sister, Jenny, who watched as Jackie was drawn further and further into a world increasingly fraught with danger. Every morning she looked for Jackie's byline in the Post, knowing only then that her sister had survived another day.Through it all -- the violence and fear as well as the moments of humor, camaraderie, and warmth -- Jackie Spinner brings home with brilliant intensity and candor what it is like to report on a war under exceptional circumstances. Read Less

Goodreads reviews for Tell Them I Didn't Cry: A Young Journalist's Story of Joy, Loss, and Survival in Iraq

Tell Them I Didn't Cry: A Young Journalist's Story of Joy, L...