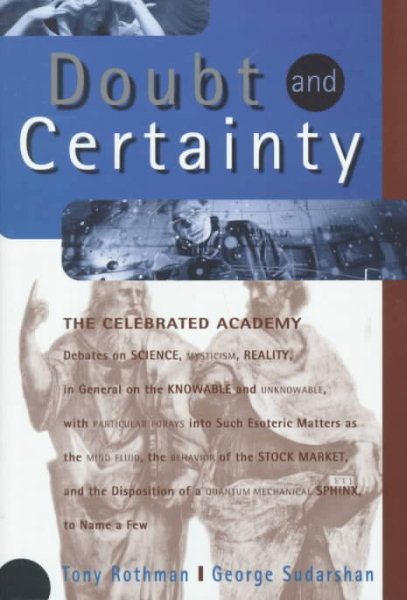 Two physicists examine philosophical and scientific questions in the imaginary setting of a modern day Platonic Academy Read More
When scientists and philosophers construct models to explain the phenomena and laws of nature, do those models simulate what’s really out there in the world, or do they only represent the languages we use to describe the world? In this far-reaching, thought-provoking book, two world-class physicists from different worlds—one born and raised in the West, the other in the East—examines some of the most profound questions ever to be investigated by science.Against the background of one of the most imaginative settings ever devised for a science book—a fictional modern-day version of Plato’s Academy—Tony Rothman and George Sudarshan, along with an eclectic assortment of students and academics, delve deep into modern physics and Eastern philosophy, and come up with startling insights on the structure of the physical world. To gain these insights, the Academy members must tackle questions such as, How much of the millennium synthesis of science and philosophy is meaningful and how much is pure nonsense? Which New Age trends are compatible with physics? Can we learn anything from parallels between physics and Eastern philosophy?The common thread that runs through the debates is the tension between the seemingly opposite, but really complementary, notions of doubt and certainty: doubt that certain fields of science really succeed in describing the world versus the rock-solid certainty in the predictions of theories like Newton’s mechanics and Einstein’s relativity.In these intriguing, often funny, sometimes violent, but always stimulating debates, Rothman and Sudarshan cover a wide range of subjects, including cosmology, quantum mechanics, theology, mathematics, complexity, synchronicity, and the past and future. Read Less

Instant Physics: From Aristotle to Einstein, and Beyond

Doubt And Certainty: The Celebrated Academy Debates On Scien...