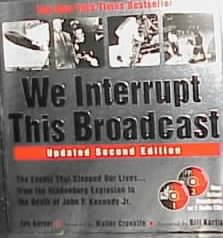 Photographs and descriptive text document such world changing events as Pearl Harbor, Nixon's resignation, the assasinations of John F. Kennedy and Martin Luther King, the fall of the Berlin Wall, and the Oklahoma City Bombing. Read More
In this attractively designed book, 41 events are presented in photos (many full page) and text. Two included CDs contain actual broadcasts, with narration by newsman Bill Kurtis. Events range in time from the Hindenburg explosion (1937), to the death of John F. Kennedy Jr. (1999), and include some of the most important events of WWII, the many assassinations of the 1960s, and various other disasters and headline making events of the 20th century. No index or scholarly trappings. 10.5x10.5 Read Less

Goodreads reviews for We Interrupt This Broadcast: The Events That Stopped Our Lives...from the Hindenburg to the Death of John F. Kennedy Jr. (2nd Edition)