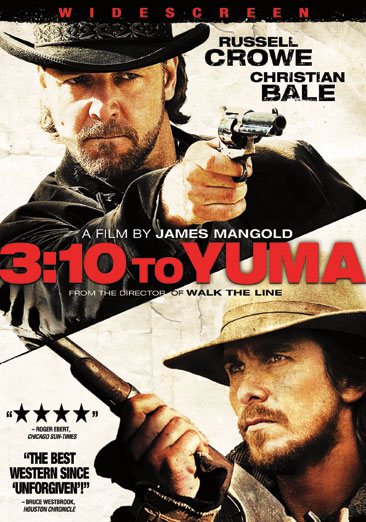 In drought-plauged nineteenth century Arizona, a poor farmer escorts a violent outlaw to trial for a life-saving fee, eluding a band of killers along the way. Read More
"Based on the Elmore Leonard story, 3:10 To Yuma is a riveting remake of the 1957 classic Western. It's the story of Dan Evans (Christian Bale), a down-and-out rancher who lost his leg in the Civil War. With a wife and two sons, he is struggling to put food on the table, and unable to make payments on his land. When the notorious gunman Ben Wade (Russell Crowe) is apprehended nearby, a few local men are needed to escort him to the town of Contention so he can be put on the 3:10 train to Yuma Prison. Few will volunteer for the job, as they know that Wade's ruthless gang will follow them, but Evans sees an opportunity to make some fast cash, and offers to go in exchange for $200. The small team of men set off, and are later joined by Evans's young son William (Logan Lerman), who has run away from home to join them. What follows is a race against time, as the group tries to get to Yuma without the clever and dangerous Wade outsmarting them." Read Less