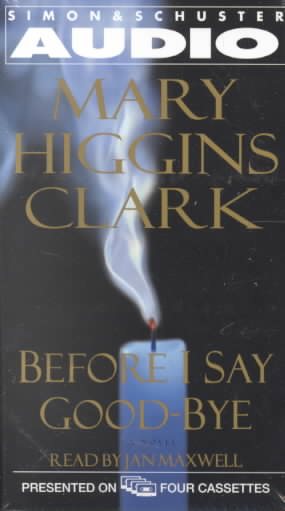 A sinister psychic manipulates a potential congresswoman by claiming to be in contact with her missing husband. Read More
Mary Higgins Clark, America's "Queen of Suspense," delves into the mystery of psychic powers in her gripping new thriller, Before I Say Good-Bye. When Adam Cauliff's new cabin cruiser, Cornelia II, blows up in New York harbor with him and several close business associates aboard, his wife, Nell MacDermott, is not only distraught at the loss but wracked with guilt because she and Adam had just had a serious quarrel and she had told him not to come home. As the investigation into the boat's explosion proceeds, Nell is shocked by the official confirmation that it was not an accident but the result of foul play. Was Adam the target of the explosion? As Nell searches for the truth about Adam's death, she receives messages from Adam transmitted by a medium. What she does not know is that she is being closely watched, and the nearer she comes to learning what actually happened on the boat that night, the nearer she is to becoming the next victim of a ruthless killer. Read Less

Goodreads reviews for Before I Say Good-Bye