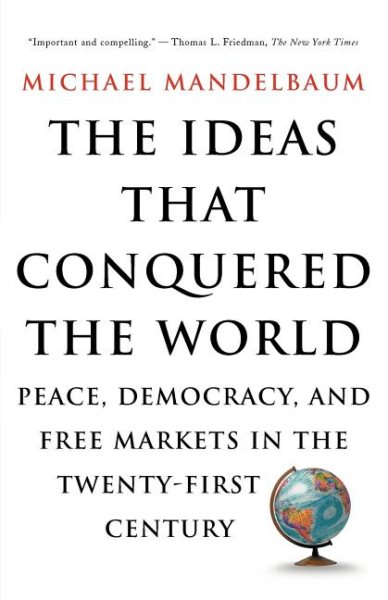 One of America's leading foreign policy thinkers provides an "important and compelling" look at today's new power realitiesThomas L. Friedman, The New York Times Read More
At the dawn of the twenty-first century, three ideas dominate the world: peace as the preferred basis for relations between and among different countries, democracy as the optimal way to organize political life, and free markets as the indispensable vehicle for the creation of wealth. While not practiced everywhere, these ideas have--for the first time in history--no serious rivals. And although the terrorist attacks of September 11, 2001, were terrible and traumatic, they did not "change everything," as so many commentators have asserted. Instead, these events served to illuminate even more brightly the world that emerged from the end of the Cold War. In The Ideas That Conquered the World, Michael Mandelbaum describes the uneven spread (over the past two centuries) of peace, democracy, and free markets from the wealthy and powerful countries of the world's core, where they originated, to the weaker and poorer countries of its periphery. And he assesses the prospects for these ideas in the years to come, giving particular attention to the United States, which bears the greatest responsibility for protecting and promoting them, and to Russia, China, and the Middle East, in which they are not well established and where their fate will affect the rest of the world. Drawing on history, politics, and economics, this incisive book provides a clear and original guide to the main trends of the twenty-first century, from globalization to terrorism, through the perspective of one of our era's most provocative thinkers. Read Less

Goodreads reviews for The Ideas That Conquered The World

The Meaning Of Sports