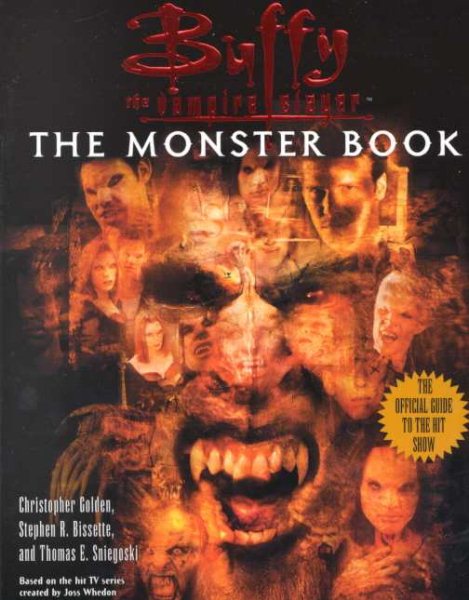 An official guide to Buffy the Vampire Slayer describes the mythology and influences behind the monsters, ghouls, and characters through interviews with the creators and details of the episodes. Read More
"Like werewolves. Zombies. Succubi, incubi....Everything you ever dreaded was under your bed and told yourself couldn't be by the light of day." -- Giles, "Welcome to the Hellmouth" Vampires, werewolves, witches, demons of nonspecific origin. All of them are drawn to the Hellmouth in Sunnydale. California. And all of them have met their fate at the hands -- or stake -- of Buffy the Vampire Slayer. Since its premiere. the popular TV show has pitted the Chosen One against the forces of darkness on a weekly basis. And her success is due in part to the intense research her Watcher Rupert Giles. and the rest of the gang have done to find the origin and best method of disposal for each villain. The Monster Book expands upon information revealed through Giles' research and knowledge, exploring the mythological, literary, and cultural origins of the endless numbers of ghoulish creatures that have tried to take a piece of the Slayer. Before the Master, there was Dracula, before "Becoming," there was Nosferatu. Before Buffy, there was...no one. The true horror fan knows that the legend of the vampire has existed for as long as there have been legends. But the demons that greet the business end of Buffy's stake are one part tradition, three parts creative genius. Indeed, the Buffy creators have purposefully moved away from recent vampire fictions to find a middle ground among ancient lore, Bram Stoker's "rules." and their own twist on the topic. "Well, if we close our eyes and say it's all just a dream it'll stab us to death. These things are real." -- Xander. "Fear, Itself" Here you'll find exclusive interviews with series creator Joss Whedon and the Emmy®-nominated team that creates the images you can't shake. The Monster Book welcomes you to the Hellmouth. Enter at your own risk. "Wish me monsters." -- Buffy, "Living Conditions" Read Less

Goodreads reviews for Buffy the Vampire Slayer: The Monster Book