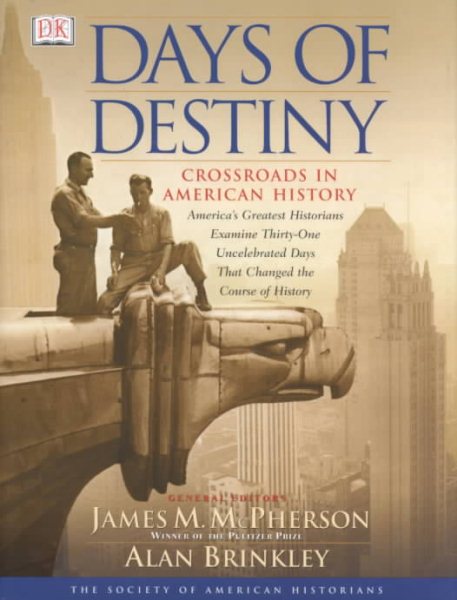 Collects essays contributed by historians describing thirty-one specific days which altered American history, including the Great Awakening of 1740, the Seneca Falls Convention, and San Francisco's "Human Be-in" gathering. Read More
America's greatest historians examine thirty-one uncelebrated days that changed the course of history There are moments in American history when something old ends and something new begins. These are the days of destiny. We asked some of the most respected (and best-selling) historians of our time to choose specific days on which American history turned. Their responses make up the month's worth of essays included in this volume. Some chose wars and battles, politics and presidents; others found answers in less well-known areas of historical study: the Great Awakening of the 1740s, the Indian Wars of the 1870s, the plight of working women at the turn of the twentieth century, the countercultural efflorescence of the late 1960s. In Days of Destiny: Crossroads in American History, the Society of American Historians brings you thirty-one engaging narratives, each illuminating with crisp prose and unparalleled scholarship an event that profoundly shaped the nation and world in which we live in. From King Philip's 1675 parley with white colonial officials to the 1973 research conference at which the biotechnology revolution was announced, these vignettes will transport you to places and introduce you to people who have made a continuing difference in the history of America. Read Less

Goodreads reviews for Days of Destiny: Crossroads in American History

The Chicago Handbook for Teachers: A Practical Guide to the...

American History, a Survey (With Map: Book and Map