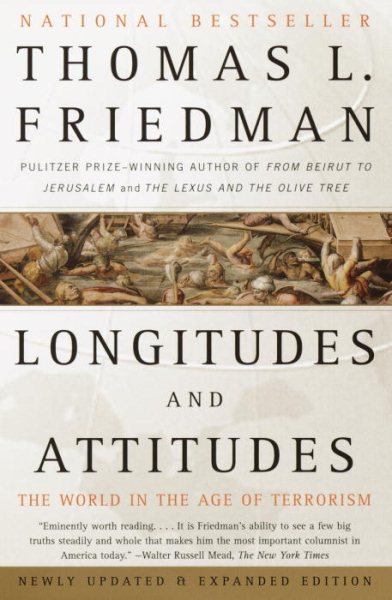 Collects the twice-weekly columns by the foreign affairs writer for "The New York Times" as published since September 11 to document the nation's emotional and analytical responses to the terrorist attacks and their aftermath. Read More
From the Pulitzer Prize–winning New York Times columnist and bestselling author of From Beirut to Jerusalem and The Lexus and the Olive Tree comes this smart, penetrating, brilliantly informed book that is indispensable for understanding today’s radically new world and America’s complex place in it.Thomas L. Freidman received his third Pulitzer Prize in 2002 “for his clarity of vision, based on extensive reporting, in commenting on the worldwide impact of the terrorist threat.” In Longitudes and Attitudes he gives us all of the columns he has published about the most momentous news story of our time, as well as a diary of his private experiences and reflections during his post–September 11 travels. Updated for this new paperback edition, with over two years’ worth of Friedman’s columns and an expanded version of his diary, Longitudes and Attitudes is a broadly influential work from our most trusted observer of the international scene. Read Less

Goodreads reviews for Longitudes and Attitudes: The World in the Age of Terrorism

Thank You for Being Late: An Optimist's Guide to Thriving in...

From Beirut to Jerusalem

Hot, Flat, and Crowded: Why We Need a Green Revolution - and...