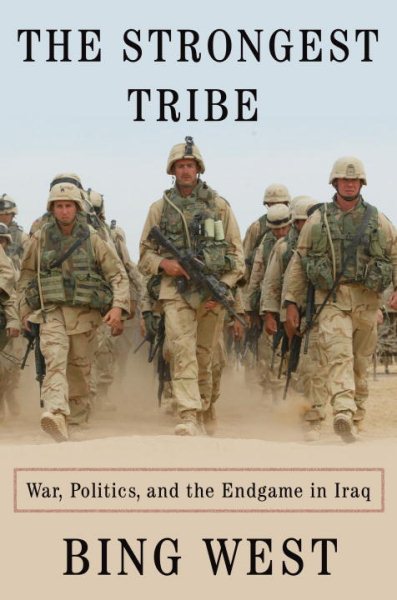 A military journalist examines the changing strategies of the U.S. military in Iraq, arguing that American policies are opening a path to victory, if more slowly than most Americans expect, and setting the stage for a stabilized Iraq. Read More
From a universally respected combat journalist, a gripping history based on five years of front-line reporting about how the war was turned around–and the choice now facing America During the fierce battle for Fallujah, Bing West asked an Iraqi colonel why the archterrorist Abu Musab al-Zarqawi had fled in women’s clothes. The colonel pointed to a Marine patrol walking by and said, “Americans are the strongest tribe.” In Iraq, America made mistake after mistake. Many gave up on the war. Then the war took a sharp U-turn. Two generals–David Petraeus and Raymond Odierno–displayed the leadership America expected. Bringing the reader from the White House to the fighting in the streets, this remarkable narrative explains the turnaround by U.S. forces. In the course of fourteen extended trips over five years, West embedded with more than sixty front-line units, discussing strategy with generals and tactics with corporals. He provides an expert’s account of counterinsurgency, disposing of myths. By describing the characters and combat in city after city, West gives the reader an in-depth understanding that will inform the debate about the war. This is the definitive study of how American soldiers actually fought –a gripping and visceral book that changes the way we think about the war, and essential reading for understanding the next critical steps to be taken.Praise for The Strongest Tribe:"Balanced, panoramic assessment of the Iraq War by former Marine and Reagan administration veteran West (No True Glory, 2005, etc.), who heralds American soldiers as its unsung heroes amid the “fog of Washington”. . .A timely, eye-opening historical analysis that provides clarity around the difficult choices the next president faces." --Kirkus (starred review)"In this important new chronicle of the war in Iraq, Bing West reveals how America reached the brink of defeat in 2006 and then managed in 2007 to stage a stunning turnaround. With its vivid, on-the-ground reporting, his book is a fitting tribute to the honor, valor, and toughness of our soldiers. Notwithstanding numerous mistakes by their leaders, West shows that their sacrifices have made success possible--as long we do not withdraw prematurely." --Senator John S. McCain“Sometimes the best way to support the troops is to criticize the generals. Bing West does both well in this book, showing a sympathy for our soldiers and Marines, but also a great ear for military truth and a determination to render events accurately. This is his third and most important book about the Iraq war. Read it.”-- Thomas E. Ricks, author of FIASCO: The American Military Adventure in Iraq “A brilliant exposition. Based on extensive experience in the war zone, Bing West recounts how Soldiers and Marines showed the President and the Pentagon the way to solve the Iraq insurgency problem. Echoing the admonition that "all politics are local", The Strongest Tribe convincingly argues that it was a grass roots strategy developed by on-scene officers who forged ties at the tribal level that brought stability to Iraq's turbulent Anbar Province and provided hope for all Iraq.” -- Lt. Gen. Bernard E. Trainor USMC (Ret.) Co-author of The Generals' War and COBRA II: The Inside Story of the Invation and Occupation of Iraq“Some four decades ago I told Bing West that his book, the Village, would become a classic in counterinsurgency warfare. And so it did. "The Strongest Tribe" will surely be West's second classic -  a moving and detailed account of almost six years of war in Iraq.” - Dr. James R. Schlesinger, Director of Central Intelligence Agency, Nixon administration; Secretary of Defense, Ford administration; Chairman, The Mitre Corporation Read Less

Goodreads reviews for The Strongest Tribe: War, Politics, and the Endgame in Iraq