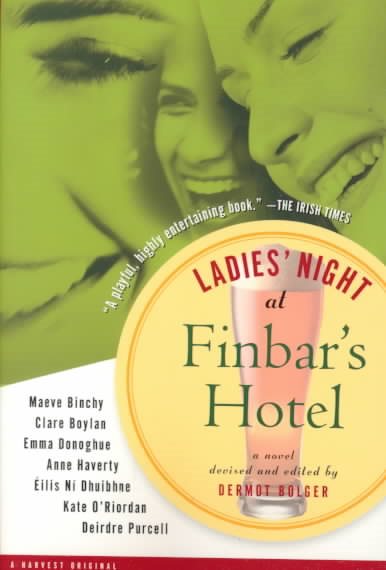 Seven Irish writers describe the revival of a legendary Dublin hotel, in individual chapters written by Maeve Binchy, Clare Boylan, Emma Donoghue, Anne Haverty, âEilis Nâi Dhuibhne, Kate O'Riordan, and Deirdre Purcell. Read More
A year has passed since the closing of Finbar's Hotel, a down-on-its-heels hotel on the Dublin quays. Now, with a rock star as its new owner, it has once more opened its doors-and Finbar's has become an ultra-chic gathering spot. Ladies' Night at Finbar's Hotel describes one night in its newly illustrious surroundings-a night filled with adventure and comic romp. In one room a man surreptitiously helps his wife's friend get pregnant, while next door a businesswoman battles her father. And down the hall, a nun struggles with the most important mission of her life. A fabulous mix of pathos and high humor, this is a sardonic tour of the gamut of human experience told by Ireland's finest modern storytellers. Maeve Binchy has written numerous bestsellers, most recently Tara Road. Dermot Bolger is the author of six novels and edited The Vintage Book of Contemporary Irish Fiction. Clare Boylan has written six novels and several nonfiction works, including The Literary Companion to Cats. Emma Donoghue is the author of Stirfry and Kissing the Witch, among other works. Anne Haverty's writing has been short-listed for the Whitbread Award. ƒilis N' Dhuibhne has published poetry, short fiction, children's books, and two novels. Kate O'Riordan writes for stage and screen, and has written two novels including The Bray House. Deirdre Purcell recently adapted her novel Falling for a Dancer as a four-part serial for BBC television. Read Less