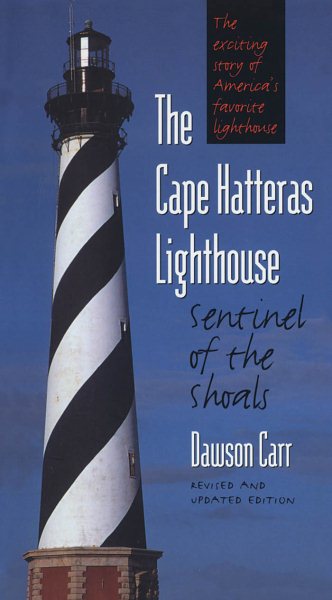 This new edition includes the amazing story of the 1999 relocation of the Cape Hatteras lighthouse, the famous North Carolina landmark that has guarded the Graveyard of the Atlantic since 1871. The tallest brick lighthouse in the U.S., it has survived two wars and numerous violent storms--and a carefully engineered relocation to a spot less threatened by beach erosion. Read More
Since 1871 the Cape Hatteras lighthouse has been a welcome sight for sailors entering the treacherous region off North Carolina's Outer Banks known as the Graveyard of the Atlantic. At 208 feet high, it is the tallest lighthouse in the country and one of the state's most famous landmarks. Through the years, it has withstood the ravages of both humans and nature, weathering numerous violent storms and two wars. But perhaps the gravest threat the structure faced in recent history was the erosion of several hundred yards of beach that once stood between it and the ocean. As powerful tides and rising sea levels increasingly endangered the lighthouse's future, North Carolinians debated fiercely over how best to save it, eventually deciding on a controversial plan to move the beacon inland to safety. First published by UNC Press in 1991, this book tells the story of the noble lighthouse from its earliest history to the present day. In this new edition, Dawson Carr details the recent relocation of the treasured landmark. For now, it seems, North Carolinians have succeeded in protecting their lighthouse, as it has protected them for over a century. Read Less

Goodreads reviews for The Cape Hatteras Lighthouse: Sentinel of the Shoals, Second Edition

Masterpieces of Painting in the J. Paul Getty Museum: Fifth...