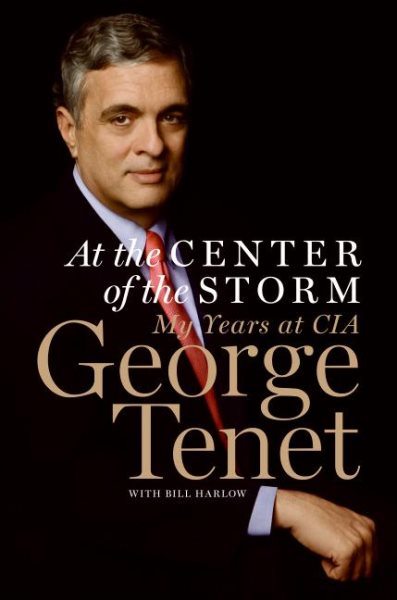 An account of the war on terror by a former CIA director traces the author's intelligence career, offers insight into the agency's inner workings, and discusses how America was both prepared and unprepared for the September 11 attacks. Read More
In the whirlwind of accusations and recriminations that emerged in the wake of 9/11 and the Iraq war, one man's vital testimony has been conspicuously absent. Candid and gripping, At the Center of the Storm recounts George Tenet's time at the Central Intelligence Agency, a revealing look at the inner workings of the most important intelligence organization in the world during the most challenging times in recent history. With unparalleled access to both the highest echelons of government and raw intelligence from the field, Tenet illuminates the CIA's painstaking attempts to prepare the country against new and deadly threats, disentangles the interlocking events that led to 9/11, and offers explosive new information on the deliberations and strategies that culminated in the U.S. invasion of Iraq.Beginning with his appointment as Director of Central Intelligence in 1997, Tenet unfolds the momentous events that led to 9/11 as he saw and experienced them: his declaration of war on al-Qa'ida; the CIA's covert operations inside Afghanistan; the worldwide operational plan to fight terrorists; his warnings of imminent attacks against American interests to White House officials in the summer of 2001; and the plan for a coordinated and devastating counterattack against al-Qa'ida laid down just six days after the attacks. Tenet's compelling narrative then turns to the war in Iraq as he provides dramatic insight and background on the run-up to the invasion, including a firsthand account of the fallout from the inclusion of "sixteen words" in the president's 2003 State of the Union address, which claimed that Saddam Hussein had sought to purchase uranium from Africa; the true context of Tenet's own now-famous "slam dunk" comment regarding Saddam's WMD program; and the CIA's critical role in an administration predisposed to take the country to war. In doing so, he sets the record straight about CIA operations and shows readers that the truth is more complex than suggested in other versions of recent history offered thus far. Through it all, Tenet paints an unflinching self-portrait of a man caught between the warring forces of the administration's decision-making process, the reams of frightening intelligence pouring in from around the world, and his own conscience. In At the Center of the Storm, George Tenet draws on his unmatched experience within the opaque mirrors of intelligence and provides crucial information previously undisclosed to offer a moving, revelatory profile of both a man and a nation in times of crisis. Read Less

Goodreads reviews for At the Center of the Storm: My Years at the CIA

At the Center of the Storm: The CIA During America's Time of...

Leading with Soul: An Uncommon Journey of Spirit, New & Revi...