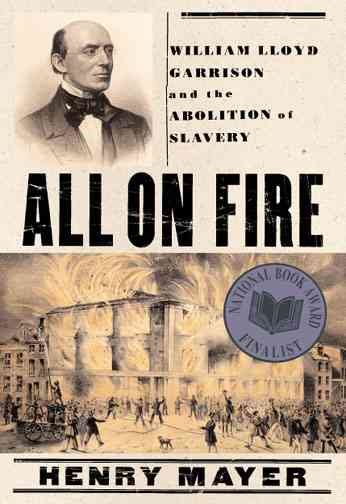 The author of Son of Thunder presents a definitive portrait of abolitionist William Lloyd Garrison and his role in the antislavery movement, discussing the impact of his newspaper The Liberator and his relationships with Frederick Douglass, Harriet Beecher Stowe, and other notable abolitionists. Reprint. 20,000 first printing. Read More
In All on Fire, William Lloyd Garrison (1805-1879) emerges as an American hero, arguably on par with Abraham Lincoln, who forced the nation to confront the explosive issue of slavery.Mayer maintains that Garrison, a self-made man of scanty formal education who founded and edited the abolitionist newspaper The Liberator, not only served as the catalyst for the abolition of slavery, but inspired two generations of activists in civil rights and the women's movement.Through Garrison, tragically torn between pacifism and abolitionist advocacy, we also meet a rich pageant of great 19th-century historical figures, including Frederick Douglass, John Quincy Adams,and Harriet Beecher Stowe. Mayer's consequential biography will be read for generations to come. Read Less

Goodreads reviews for All on Fire: William Lloyd Garrison and the Abolition of Slavery

All on Fire: William Lloyd Garrison and the Abolition of Sla...