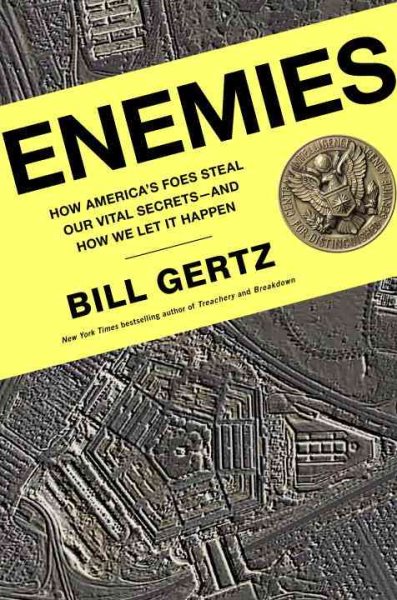 Reveals how some of America's most dangerous enemies have infiltrated the U.S. government in order to obtain top-secret information, offering a study of the gaps in America's defense and their implications for national security. Read More
It’s the great untold story of the war on terror.Taking advantage of gaping holes in America’s defenses, terrorist organizations and enemy nations like Communist China, North Korea, Russia, and Cuba—not to mention some so-called friends—are infiltrating the U.S. government to steal our most vital secrets and use them against us. And most astonishing of all, our leaders are letting it happen. In the explosive new book Enemies, acclaimed investigative reporter Bill Gertz uncovers the truth about this grave threat to our national security and America’s harrowing failures to address the danger. Gertz’s unrivaled access to the U.S. intelligence and defense communities allows him to tell the whole shocking story, based on previously unpublished classified documents and dozens of exclusive interviews with senior government and intelligence officials. He takes us deep inside the dark world of intelligence and counterintelligence—a world filled with lies and betrayal, spies sleeping with enemy spies, and moles burrowing within the FBI, the CIA, the Pentagon, and even the White House.Enemies stunningly reveals:• The untold story of one of the most damaging enemy spy penetrations in U.S. history—and how the FBI bungled the investigation• How Communist China’s intelligence and influence operations may have reached the highest levels of the U.S. government• Why Russia has as many spies in America today as it did at the height of the Cold War• How al-Qaeda and other terrorist groups use official identification, uniforms, and vehicles to infiltrate secure areas and carry out attacks • How some thirty-five terrorist groups are targeting the United States through espionage• A startling account of the many enemy spies the U.S. has let get away• How a Cuban mole operated high up in the Pentagon for sixteen years• The gross ineptness that led U.S. officials to hound an innocent man while the real mole operated right under their noses• Why aggressive counterintelligence represents the only real defense against terrorists and enemy spies—and why the U.S. intelligence bureaucracy resists itDelivering the kind of shocking new information that led Washington Monthly magazine to declare him “legendary among national security reporters,” Bill Gertz opens our eyes as never before to deadly threats and counterintelligence failures that place every American at risk.America’s enemies, including terrorist organizations, are stealing our most vital secrets to use against us—and the U.S. government makes it shockingly easy for them to do so. Filled with headline-making revelations from acclaimed reporter Bill Gertz, Enemies reveals the frightening untold story of the War on Terror.Also available as an eBook Read Less

Goodreads reviews for Enemies: How America's Foes Steal Our Vital Secrets--and How We Let It Happen

The China Threat: How the People's Republic Targets America

iWar: War and Peace in the Information Age