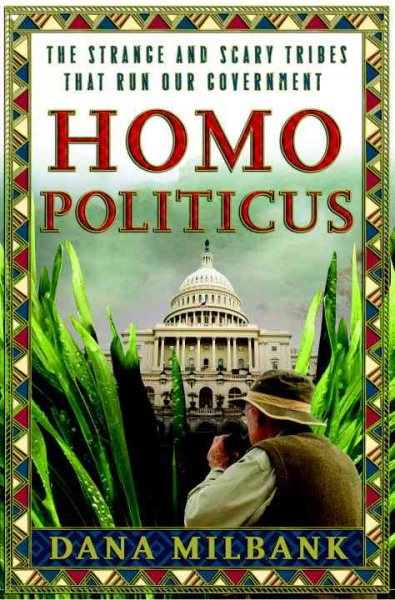 Explores the enigmatic culture of American politics, examining the often bizarre behavior, language, culture, social institutions, and taboos of Washington politicians. Read More
Washington’s most acerbic (and feared) columnist, the Washington Post’s Dana Milbank, skewers the peculiar and alien tribal culture of politics.Deep within the forbidding land encircled by the Washington Beltway lives the tribe known as Homo politicus. Their ways are strange, even repulsive, to civilized human beings; their arcane rites often impenetrable; their language coded and obscure. Violating their complex taboos can lead to sudden, harsh, and irrevocable punishment. Normal Americans have long feared Homo politicus, with good reason. But fearless anthropologist Dana Milbank has spent many years immersed in the dark heart of Washington, D.C., and has produced this indispensable portrait of a bizarre culture whose tribal ways are as hilarious as they are outrageous.Milbank’s anthropological lens is highly illuminating, whether examining the mating rituals of Homo politicus (which have little to do with traditional concepts of romantic love), demonstrating how status is displayed in the Beltway’s rigid caste system (such as displaying a wooden egg from the White House Easter Egg Roll) or detailing the precise ritual sequence of human sacrifice whenever a scandal erupts (the human sacrificed does not have to be the guiltiest party, just the lower ranked).Milbank’s lacerating wit mows down the pompous, the stupid, and the corrupt among Democrats, Republicans, reporters, and bureaucrats by naming names. Every appalling anecdote in this book is, alas, true. Read Less

Goodreads reviews for Homo Politicus: The Strange and Scary Tribes that Run Our Government

Tears of a Clown: Glenn Beck and the Tea Bagging of America

Smash Mouth: Two Years In The Gutter With Al Gore And George...