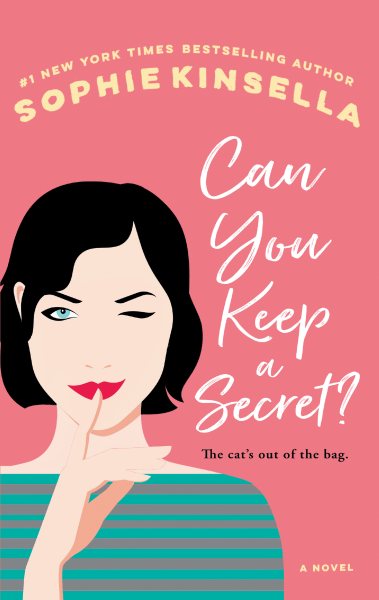 After the worst day of her life, Emma Corrigan spills her darkest secrets to a stranger on an airplane, but when he re-emerges in her life, she will have to face the things she said to him, and her growing feelings for him. Read More
SOON TO BE A MAJOR MOTION PICTURE • From #1 New York Times bestselling author Sophie Kinsella, a novel with the same wicked humor, buoyant charm, and optimism as her beloved Shopaholic series. Meet Emma Corrigan, a young woman with a huge heart, an irrepressible spirit, and a few little secrets: Secrets from her boyfriend: I’ve always thought Connor looks a bit like Ken. As in Barbie and Ken. Secrets from her mother: I lost my virginity in the spare bedroom with Danny Nussbaum while Mum and Dad were downstairs watching Ben-Hur. Secrets she wouldn’t share with anyone in the world: I have no idea what NATO stands for. Or even what it is. Until she spills them all to a handsome stranger on a plane. At least, she thought he was a stranger. . . . But come Monday morning, Emma’s office is abuzz about the arrival of Jack Harper, the company’s elusive CEO.  Suddenly Emma is face-to-face with the stranger from the plane, a man who knows every single humiliating detail about her. Things couldn’t possibly get worse. Or could they? Praise for Can You Keep a Secret? “Venturing beyond Saks and Barney’s, the bestselling author of Confessions of a Shopaholic and Shopaholic Ties the Knot entertains readers with backstabbing office shenanigans, competition, scandal, love and sex. . . . Kinsella’s down-to-earth protagonist is sure to have readers sympathizing and doubled over in laughter.”—Publishers Weekly “If laughing out loud in public places is your bag, be sure to pick up [Can You Keep a Secret?]. Heroine Emma Corrigan is going to be your new best friend.”—Boston Herald “Kinsella’s timing is so perfect, her instincts so spot-on, that it’s easy to . . . devour the book like the guilty pleasure it is.”—Miami Herald“Chick lit at its lightest and breeziest . . . filled with fabulous clothes, stalwart friends, and snotty enemies waiting to be taken down a peg.”—Orlando Sentinel “[Kinsella’s] dialogue is sharp, even her minor characters are well drawn, and her parody of the marketing world is very funny.”—Washington Post Book World “[A] comedic frenzy of ill-fated events . . . punchy . . . fast-moving.”—Rocky Mountain News  Read Less

Goodreads reviews for Can You Keep a Secret?: A Novel

My Not So Perfect Life: A Novel

Love Your Life: A Novel