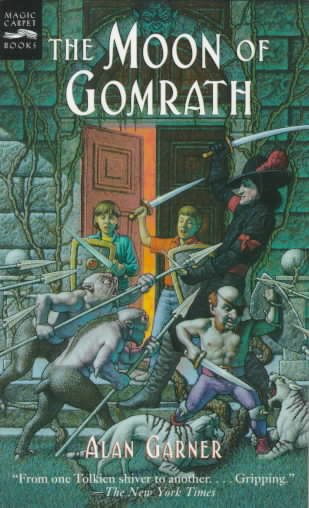 With the help of the wizard Cadellin, Colin and Susan struggle to contain the forces of evil unleashed by the inadvertent awakening of the band of ancient horsemen known as the Wild Hunt Read More
The Moon of Gomrath is the name of the one night of the year when the Old Magic is at its most powerful. Had Colin and Susan known this, they would have never obeyed the strange compulsion that drove them to light a fire on the Beacon. But now it is too late--the horsemen called the Wild Hunt are awake and on the ride, and no one is safe.Colin is captured, Susan falls under the sway of the hideous Brollachan, and all along Alderley Edge the forces of evil rally for the conflict to come. For there will be a battle, the likes of which cannot be imagined by mortals. The outcome--and all the hopes of the world--will depend on three unlikely champions: Susan, Colin, and their ally, the wizard Cadellin. Read Less

Goodreads reviews for The Moon of Gomrath: A Tale of Alderley

THE WEIRDSTONE. A Tale of Alderly.; SciFi - SCIFI