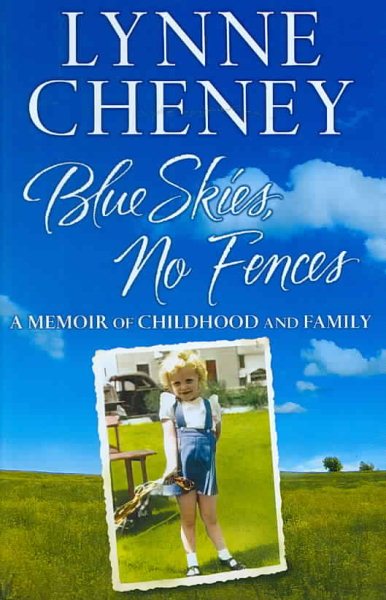 Traces the author's ancestry, as well as that of her vice president husband, from seventeenth-century America through the mid-twentieth century, in a memoir that also describes their youth, marriage, and shared role as parents. Read More
In Blue Skies, No Fences:  A Memoir of Childhood and Family, Lynne Cheney re-creates the years after World War II in a small town on the high plains of the West.  Portraying an era that started with the Ink Spots on the Zenith Radio in her family's living room and ended with Elvis on the jukebox at the local canteen, she tells of coming of age in a time when the country seemed in control of its destiny and individual Americans in charge of theirs.  She describes Casper, Wyoming, where she met a young man named Dick Cheney, and remembers her hometown as a place where the future seemed as bright as the blue sky and life's possibilities as boundless as the prairie.  It was also a place where a pioneer heritage prevailed, and Cheney traces the paths of forebears who journeyed westward, strengthened against adversity by a bedrock belief that they would find a better life.  An uplifting exploration of a special time and place in American history, Blue Skies, No Fences is also a heartfelt tribute to those optimistic souls who, in Lynne Cheney's words, "pinned their hopes on America and kept heading west." Read Less

Goodreads reviews for Blue Skies, No Fences: A Memoir of Childhood and Family

When Washington Crossed the Delaware: A Wintertime Story for...

We the People: The Story of Our Constitution