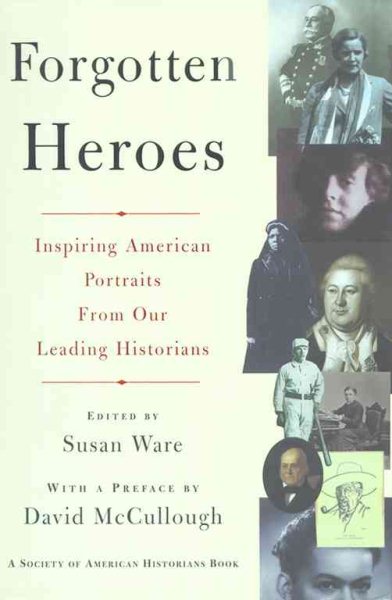 Chronicles the history of men and women who played a significant role in American history but who have been left out of textbooks Read More
The pages of the past are full of characters who remind us that history depends upon the great deeds of men and women, whether famous or humble. Where would America be without George Washington, or Daniel Boone, or Sojourner Truth, or Babe Ruth? Where would we be without so many characters who are less well remembered today? Historians and biographers regularly come across stories of little-known or forgotten heroes, and this book provides a chance to rescue some of the best of them. In Forgotten Heroes, thirty-five of the country's leading historians recount their favorite stories of underappreciated Americans. From Stephen Jay Gould on deaf baseball player Dummy Hoy; to William Leuchtenburg on the truth behind the legendary Johnny Appleseed; to Christine Stansell on Margaret Anderson, who published James Joyce's Ulysses; these portraits can be read equally for delight, instruction, and inspiration Taken together, however, the whole is much more than the sum of its parts. Every culture needs heroes who lead by example and uplift us all in the process. Too often lately, historians have been more intent on picking apart the reputations of previously revered Americans. At times it has seemed as if the academy were on the attack against much of its own culture, denying its past greatness while making heroes only of its dissidents and doubters. Yet as this collection vividly demonstrates, heroes come in many shapes and sizes, and we all gain when we remember and celebrate them. Forgotten Heroes includes nearly as many women as men, and nearly as many people from before 1900 as after. It expands the traditional definition of hero to encompass not only military figures and politicians who took risks for great causes, but also educators, religious leaders, reformers, labor leaders, publishers, athletes, and even a man who started a record company. Many of them were heroes of conscience -- men and women who insisted on doing the right thing, no matter how unpopular or risky, commanding respect even from those who disagreed. Some were famous in their day and have since been forgotten, or remembered only in caricature. Others were little-known even when alive -- yet they all deserve to be remembered today, especially at the gifted hands of the authors of this book. Read Less