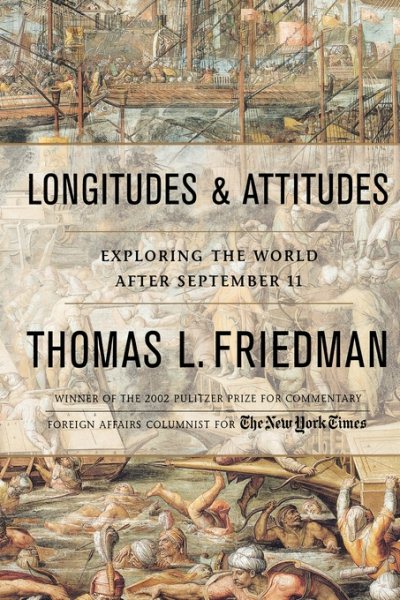 Collects the twice-weekly columns by the foreign affairs writer for the "New York Times" as published since September 11 to document the nation's emotional and analytical responses of the attacks and their aftermath. Read More
America's leading observer of the international scene on the minute-by-minute events of September 11th--before, during and after As the Foreign Affairs columnist for the The New York Times, Thomas L. Friedman is in a unique position to interpret the world for American readers. Twice a week, Friedman's celebrated commentary provides the most trenchant, pithy,and illuminating perspective in journalism.Longitudes and Attitudes contains the columns Friedman has published about the most momentous news story of our time, as well as a diary of his experiences and reactions during this period of crisis. As the author writes, the book is "not meant to be a comprehensive study of September 11 and all the factors that went into it. Rather, my hope is that it will constitute a 'word album' that captures and preserves the raw, unpolished, emotional and analytical responses that illustrate how I, and others, felt as we tried to grapple with September and its aftermath, as they were unfolding."Readers have repeatedly said that Friedman has expressed the essence of their own feelings, helping them not only by explaining who "they" are, but also by reassuring us about who "we" are. More than any other journalist writing, Friedman gives voice to America's awakening sense of its role in a changed world. Read Less

Goodreads reviews for Longitudes and Attitudes: Exploring the World After September 11

Thank You for Being Late: An Optimist's Guide to Thriving in...

From Beirut to Jerusalem