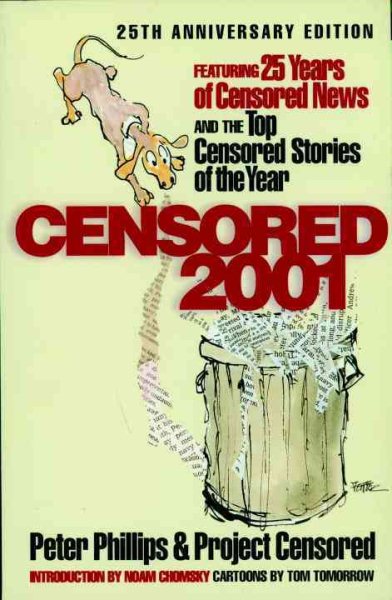 An eye-opening collection of "censored" stories highlights twenty-five politically charged, socially conscious, and controversial pieces of journalism that stayed on the cutting-room floor. Original. 25,000 first printing. Read More
The yearly volumes of Censored, in continuous publication since 1976 and since 1995 available through Seven Stories Press, is dedicated to the stories that ought to be top features on the nightly news, but that are missing because of media bias and self-censorship. The top stories are listed democratically in order of importance according to students, faculty, and a national panel of judges. Each of the top stories is presented at length, alongside updates from the investigative reporters who broke the stories.Beyond the Top 25 stories, additional chapters delve further into timely media topics: The Censored News and Media Analysis section provides annual updates on Junk Food News and News Abuse, Censored Déjà Vu, signs of hope in the alternative and news media, and the state of media bias and alternative coverage around the world. In the Truth Emergency section, scholars and journalists take a critical look at the US/NATO military-industrial-media empire. And in the Project Censored International section, the meaning of media democracy worldwide is explored in close association with Project Censored affiliates in universities and at media organizations all over the world.A perennial favorite of booksellers, teachers, and readers everywhere, Censored is one of the strongest life signs of our current collective desire to get the news we citizens need—despite what Big Media tells us. Read Less

Goodreads reviews for Censored 2001: Featuring 25 Years of Censored News and the Top Censored Stories of the Year

Censored 1999: The News That Didn't Make the News