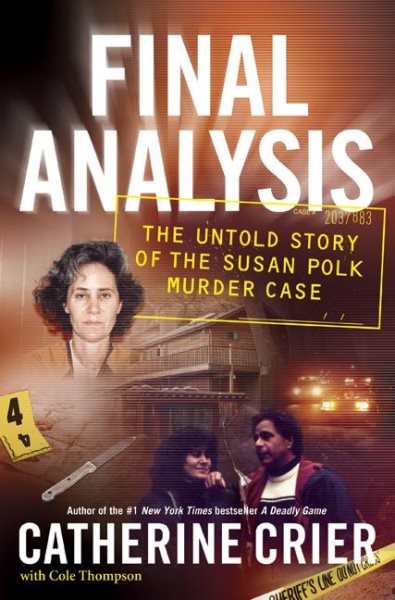 Examines the case of Susan Polk, the mother of three and wife of her former therapist, a man twenty-five years her senior, who after years of alleged abuse, stabbed to death the man who had seduced his teenage patient three decades earlier. Read More
In October 2002, Susan Polk, a housewife and mother of three, was arrested for the murder of her husband, Felix. The arrest in her sleepy northern California town kicked off what would become one of the most captivating murder trials in recent memory, as police, local attorneys, and the national media sought to unravel the complex web of events that sent this seemingly devoted housewife over the edge.Now, with the exclusive access and in-depth reporting that made A Deadly Game a number one New York Times bestseller, Catherine Crier turns an analytical eye to the story of Susan Polk, delving into her past and examining how over twenty years of marriage culminated in murder. Tracing the family's history, Crier skillfully maneuvers the murky waters of the Polk's marriage, looking at the real story behind Susan, Felix, and their unorthodox courtship. When Susan was in high school, Felix, who was more than twenty years her senior, had been her psychologist, and it was during their sessions that the romantic entanglement began. From these troubling origins grew a difficult marriage, one which produced three healthy boys but also led to disturbing accusations of abuse from both spouses.With extraordinary detail, Crier dissects this dangerous relationship between husband and wife, exposing their psychological motivations and the painful impact that these motivations had on their sons, Adam, Eli, and Gabriel. Drawing on sources from all sides of the case, Crier masterfully reconstructs the tumultuous chronology of the Polk family, telling the story of how Susan and Felix struggled to control their rambunctious sons and their disintegrating marriage in the years and months leading up to Felix's death.But the history of the Polk family is only half the story. Here Crier also elucidates the methodical police work of the murder investigation, revealing never-before-seen photos and writings from the case file. In addition, she carefully scrutinizes the many twists and turns of the remarkable trial, exploring Susan's struggles with her defense attorneys and her shocking decision to represent herself.Dark, psychological, and terrifying, Final Analysis is a harrowing look at the recesses of the human mind and the trauma that reveals them. Read Less

A Deadly Game: The Untold Story of the Scott Peterson Invest...

Patriot Acts: What Americans Must Do to Save the Republic

Contempt: How the Right Is Wronging American Justice