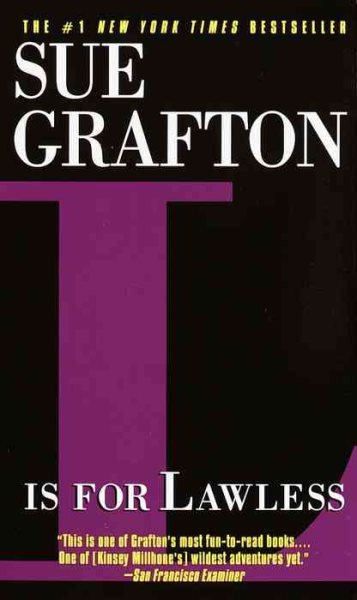 Kinsey Millhone gets in over her head when she becomes involved in an elusive mystery that entangles her in everyone's dirty laundry--literally Read More
"THIS IS ONE OF GRAFTON'S MOST FUN-TO-READ BOOKS. . . . One of [Kinsey Millhone's] wildest adventures yet."--San Francisco ExaminerWhen Kinsey Millhone agrees to do a favor for Henry Pitts, her lovable octogenarian landlord, she literally gets taken for the ride of her life. The family of a recently deceased WWII veteran wants her to find out why the military has no record of his service. All Kinsey has to do, she thinks, is cut through some government red tape. But when the dead man's house is ransacked and his old army buddy is beaten up, she quickly realizes he was not all he seemed. Before long Kinsey is trailing crooks halfway across the country, impersonating a hotel maid, tangling with a baseball bat-wielding grandmother, and running from one very dangerous character. With her money almost gone and her nerves frayed, Kinsey's got to solve a decades-old crime and make it back home in time for Henry's wedding . . . if she can make it back at all. . . . Read Less

Goodreads reviews for L Is for Lawless (Kinsey Millhone Mysteries)

B is for Burglar

W is for Wasted (A Kinsey Millhone Novel)