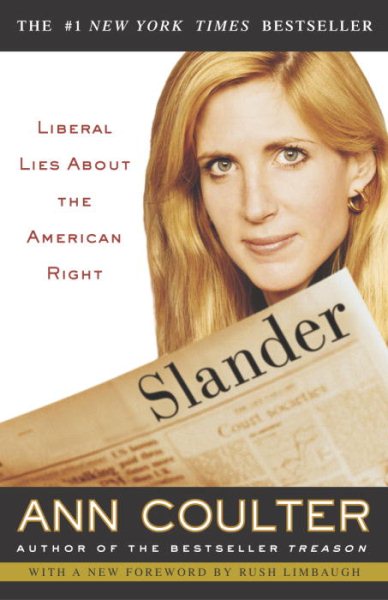 The best-selling author of High Crimes and Misdemeanors offers a scathing attack on the political left and its partisan attempts to denegrate American conservatives. Reprint. 200,000 first printing. Read More
The hottest and most controversial book of the year! Find out who really controls the media in America.“[Ann Coulter] is never in doubt. And that, along with her bright writing, sense of irony and outrage, and her relish at finally hitting back at political opponents (especially in the media) is what makes Slander such refreshing and provocative reading.”—Los Angeles Times“[Ann Coulter] is a fluent polemicist with a gift for Menckenesque invective . . . and she can harness such language to subtle, syllogistic argument.”—Washington Post Book World“The most popular nonfiction book in America.”—New York Times“The real value of Slander . . . is not in the jokes or devastating exposés of liberal politicians and their allies, but the serious and scholarly study of just how entrenched the media prejudice is against anyone whose politics are even faintly conservative.”—New York Sun“Written with a great deal of passion . . . the real source of its strength—and its usefulness—was its painstaking marshalling of evidence . . . More important than [High Crimes and Misdemeanors] because it addresses a much broader issue, and one of lasting significance.”—National Review Read Less

Goodreads reviews for Slander: Liberal Lies About the American Right