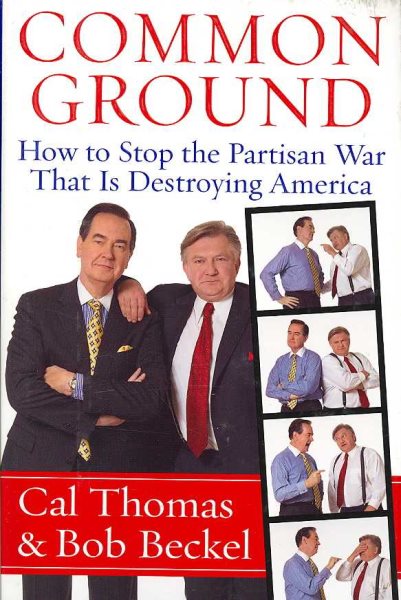 A conservative-and-liberal columnist team for "USA Today" makes recommendations for how adversarial politicians can move beyond partisanship to restore civility and productiveness throughout America. Read More
Inspired by their popular USA Today column, conservative Cal Thomas and liberal Bob Beckel show politicians of both stripes how to get beyond partisanship, restore civility, and move our country forward. Thomas and Beckel are a unique pair in today's political climate—pundits from opposite sides who not only talk to each other but work together to find common ground on some of the most divisive issues facing us, from the war in Iraq to gay marriage to the Patriot Act. Common Ground unmasks the hypocrisy of many of the issues, organizations, and individuals who created and deepened the partisan divide at the center of American politics, and makes a strategic case for why this bickering must stop.Throughout, Thomas and Beckel explode conventional wisdom and offer surprising new conclusions:The Red State/Blue State divide: Myth!A "common ground" presidential candidate can win in 2008: Reality!"Polarizers" like Ann Coulter and Michael Moore are the future of political debate: Myth!Major-party politics faces extinction: Reality! These guys should know. For years Beckel and Thomas contributed to the climate of polarization in Washington . . . and they admit it. "We're two guys who spent a lot of years in the polarizing business, but on opposing sides," they write. "We helped write the game plan, and we have participated in everything from getting money out of true believers to appearing on television to help spread the contentious message. In many cases, we wrote the message. We know the gig, and it's just about up."In this much-needed book, Thomas and Beckel go beyond their column to offer a sobering overview of the current political divide and its corrosive effect on us all.They also explain how bipartisanship and consensus politics are not only good for the day-to-day democratic process but essential for our nation's future well-being.Entertaining and informative, funny and healing, Common Ground is must reading for all concerned citizens. Read Less

Goodreads reviews for Common Ground: How to Stop the Partisan War That Is Destroying America

What Works: Common Sense Solutions for a Stronger America

Blinded by Might: Can the Religious Right Save America?