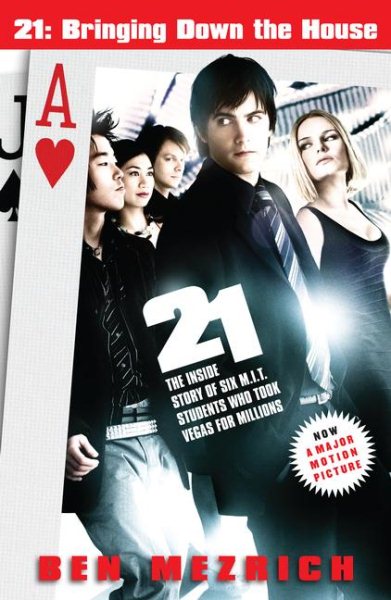 Recounts the story of how a notorious gang of MIT blackjack savants devised and received backing for a system for winning at the world's most sophisticated casinos, an endeavor that earned them more than three million dollars. Read More
The long-running New York Times bestseller that has become a cultural phenomenon, Bringing Down the House is an action-filled caper carried out by the unlikeliest of cons -- supersmart geeks. Gambling pervaded the M.I.T. campus, and genius kids with money and glittering futures were just as likely to be found in a Paradise Island casino as in the school library. A highly elite group of mathletes was recruited to join The Club, a small, secret blackjack organization dedicated to counting cards and beating the major casinos across the nation at their own game. As a successful ring of card savants, backed by a mysterious ringleader and shadowy investors, they infiltrated Vegas and won millions. The Boston Herald acclaimed it as "a suspenseful tale that portrays the players as Davids going up against Goliaths." And Bill Simmons of ESPN magazine exclaimed, "This book made me want to gamble! Vegas! Vegas!" Filled with tense action, high stakes, and incredibly close calls, Bringing Down the House is a nail-biting chronicle of a real-life Ocean's Eleven. It's one story that Vegas does not want you to read. Read Less

Goodreads reviews for 21: Bringing Down the House - Movie Tie-In: The Inside Story of Six M.I.T. Students Who Took Vegas for Millions

Bitcoin Billionaires: A True Story of Genius, Betrayal, and...

Bringing Down the House: The Inside Story of Six M.I.T. Stud...