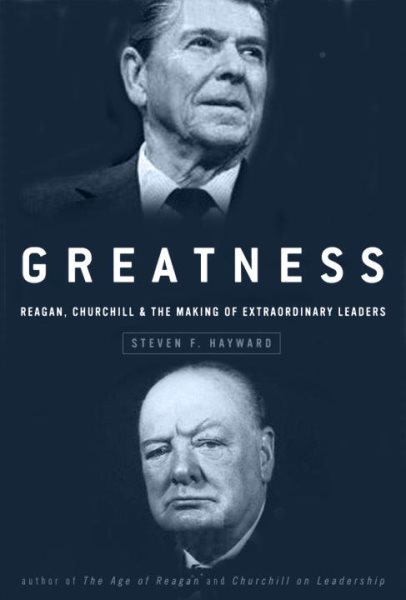 Draws parallels between Ronald Reagan and Winston Churchill, assessing their individual contributions to their eras and discussing their political agendas, talent as communicators, and accomplishments in the world of statesmanship. Read More
The incredible unexplored connections between two of history’s greatest leaders Ronald Reagan and Winston Churchill were true giants of the twentieth century, but somehow historians have failed to notice the many similarities between these extraordinary leaders. Until now. In Greatness, Steven F. Hayward—who has written acclaimed studies of both Reagan and Churchill—goes beneath the superficial differences to uncover the remarkable (and remarkably important) parallels between the two statesmen. In exploring these connections, Hayward shines a light on the nature of political genius and the timeless aspects of statesmanship—critical lessons in this or any age.A swift-moving and original book, Greatness reveals:• The striking similarities between Reagan’s and Churchill’s political philosophies: the two were of the same mind on national defense, the economy, and many other critical issues• What made both Reagan and Churchill so effective in the public arena—including their shared gift for clearly communicating their messages to the people • The connecting thread of the Cold War, which was bookended by Churchill’s “Iron Curtain” address of 1946 and Reagan’s “Tear Down This Wall” speech of 1987• The odd coincidences that mark everything from their childhoods to their shifts from Left to Right to their shared sense of personal and national destinyUltimately, Hayward shows, the examples of Churchill and Reagan teach us what is most decisive about political leadership at the highest level—namely, character, insight, imagination, and will. Greatness also serves as a sharp rebuke to contemporary historians who dismiss notions of greatness and the power of individuals to shape history. Hayward demonstrates that the British historian Geoffrey Elton had it right when he wrote, “When I meet a historian who cannot think that there have been great men, great men moreover in politics, I feel myself in the presence of a bad historian.” Read Less

Goodreads reviews for Greatness: Reagan, Churchill, and the Making of Extraordinary Leaders

Churchill on Leadership : Executive Success in the Face of A...

Churchill on Leadership: Executive Success in the Face of Ad...

The Real Jimmy Carter: How Our Worst Ex-President Undermines...