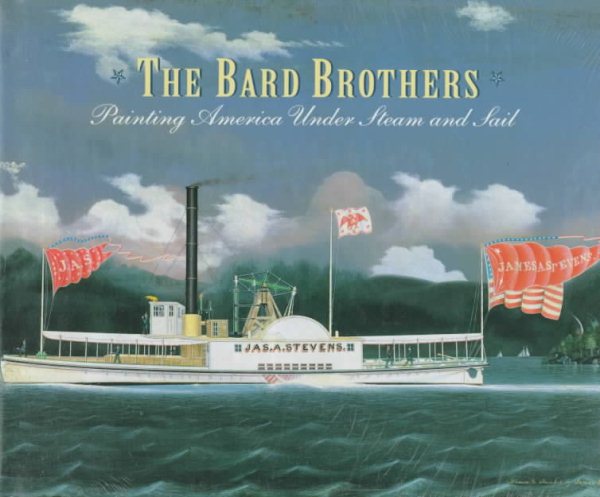 Much of what we know about how steamboats looked between about 1835 and 1900 comes from the meticulo... Read More
Much of what we know about how steamboats looked between about 1835 and 1900 comes from the meticulously detailed paintings of John and James Bard, twin brothers who were born in New York City in 1815, coincidentally the same year that Robert Fulton died. The Bard brothers taught themselves to paint, turning out their first joint work at the age of twelve, and they became the greatest chroniclers of the steamboat era. Working for owners, captains, boat builders - anyone who would commission a ship's portrait - John and James Bard turned out thousands of stunning paintings that have long been treasured by museums and collectors. Sometimes regarded as folk artists because of the naive directness and simplicity of their paintings, the Bards created works that have become icons of Americana.The narrative tells the life stories of the brothers, who grew up in modest circumstances in lower Manhattan. Tragically, John Bard's life ended early. Estranged from his brother, John drifted away from New York, only to return to die in a city poorhouse at about the age of forty. James, however, perhaps the more talented of the two, built a substantial career and continued painting for another forty years, completing his last two watercolors in 1890.The Bard paintings combine the naive charm of these untutored artists with the sharp observations of craftsmen working for demanding clients. Every detail in their work is attended to, from the sculpted figureheads decorating the pilot houses above the steamboat roofs to the gleaming, mullioned glass windows of the passenger saloons. Almost invariably seen in strict profile moving from right to left (so that the trailing banners would read correctly), the steamboats and sailboats in Bard paintings seem as fresh and alive today as they did 150 years ago. Read Less

Goodreads reviews for The Bard Brothers: Painting America Under Steam and Sail

A Book of Poems Amd Pastorals

Musical Festival of the Choral Society of Frederick, Md - Pr...